Tonya Harding: “I mean, come on! What kind of friggin’ person bashes in their friend’s knee? Who would do that to a friend?”

Towards the end of every year there are multiple films released that are aimed at garnering some awards success as well as, of course, making some impact at the box office, thereby becoming ‘must see’ films. Many of these films are based on real events or use real people as subjects, thereby having something to hook people in with. So we have the new Margot Robbie film “I, Tonya” (2017), that is not only about a real person but is framed by a real event – although as you watch the movie the motivations for that event as well as who was actually involved is called into question. That event was the assault on rival ice skater Nancy Kerrigan. “I, Tonya” might call into question what you know about the subject, Tonya Harding, as well as that incident. Or, it might not, which in the end is the inherent strength and weakness of this film, which leads directly into its motivation as well as actual quality.

Directed by Australian Craig Gillespie probably best known for the Ryan Gosling starring quirky independent “Lars and the Real Girl” (2007) this new film sees him moving into more serious territory along with star Margot Robbie, who you can see wants to be taken more seriously. This is done by taking a well-known tabloid star (in this case Tonya Harding and her brood), the story she is known for, then giving the narrative a twist and throwing in some other camera tricks, such as the famous ice-skating moves the subject is known for. Gillespie has made a technically good film with a narrative that matches the story, however where it gets lost is that it is knowingly does not take itself seriously while it deals with some pretty real as well as serious issues.

The film starts in the mid 1970s with a four year-old Tonya whose mother forces her into figure skating by aggressively pursuing a local trainer and using cruelty and negligence to make her daughter skate. As Tonya grows up, she rapidly becomes one of the best figure skaters in the United States after her mother takes her out of school to focus exclusively on her athletic career. I will not go any further into the plot as much of the enjoyment of the film is not knowing portions of what occurs, particularly in the last half of I, Tonya.

The narrative (as well as the performances) are the unique parts of this film which can be seen in the trailers, so there are no surprises going into it, although it can be quite jarring. “I, Tonya” plays almost everything for laughs which in my mind is a huge error. The narrative plays out with faux interviews featuring all of the principal characters talking directly to the camera as they explain portions of the story, then we see that portion acted out. All of the characters tell their own versions of what is occurring, which means there might be confusion as well as conflicting views of the same events. This is a device used to ratchet up the importance of what is happening as well as reducing the negative elements much like Scorsese did in his often-lambasted movie “The Wolf of Wall Street” (2013). That particular device was a mistake then, and it is a mistake here. It literally lets all of the characters off the hook; this is egregious as they are all not the most positive or honest people around. When elements that are being dealt with are parental physical abuse, partner physical abuse, possible rape as well as physical harm to a third person, this is not something that should be made light of. In saying that, I do believe that there is room for humor in all films, but when you treat some crimes like they are treated here it is not fair to let audiences decide what is played for humor and what is played in reality.

There is no doubt that there is a real buzz about seeing some of these actors playing outsized roles, led by Margot Robbie as the titular character Tonya, here she goes from adolescence through to her adult life, all the while being interviewed as the character. Robbie is very good; you can see she has done her homework, but to be honest this does not seem a million miles from her characterization of Harley Quinn from the recent “Suicide Squad” (2016). The revelation (although not if you have followed her career) is Allison Janney as Harding’s mother, who for most of the film is in a breathing apparatus as she dishes on the kind of mother she was (horrible), as well as seeing her in re-enacted scenes being nothing short a ‘Mommy Dearest’. There has been early talk of awards consideration but I think that the performance is possibly too good for this film. The rest of the cast is formidable led by Sebastian Stan as Harding’s husband who here really gets to shine in ways not seen in his stint in the Marvel Cinematic Universe. Then there is, Julianne Nicholson as Harding’s long suffering coach, in an understated role, she is just as excellent as Janney but not as flashy. Overall all the actors’ carry out their jobs very well, it is just a shame about that the creative choices made by the director, for me these are insurmountable.

One of the highlights of the movie is the way in which the difference in the economic situation of Harding and her family are in direct opposition to how the skating world wanted their skaters to appear. This is not only a tragedy for Harding, but speaks to something more in the psyche of sports not only in the US but throughout the world. There are many signs as to why the skating establishment did not only shun Harding but plainly thwarted her efforts to be a star. Harding wore low-rent costumes, did not have a hair and make-up person, skated to popular music as well as heavy metal and her routines were highly charged. In many ways she was a rule breaker in that she could see that appealing to a wider audience meant she would be more successful than other established skaters. If there had have been more of a concentration on that portion of the story then this might have been a better film and explained her actions in the last third of the movie more clearly.

There are times when a film should be great, it has so much going for it that it should not only live up to expectations but also surpass them. In this case it unfortunately does not, there are very definite bright spots in the film, the performances are all very good as well as the skating work being outstanding which is a main part of the film. In fact the CGI work is not bad considering what is being asked of the special effects team. I do wish the film had moved away from the sensationalist aspect of the narrative so that it did treat all the physical violence a bit more seriously, but regardless of that this is still an entertaining movie on its surface but it will not stay with you much longer after the credits role. This is such a missed opportunity as it could have been an interesting analysis of the media as well as sports and the Olympics. If you want to have some fun with laughs and little depth then this will be for you. 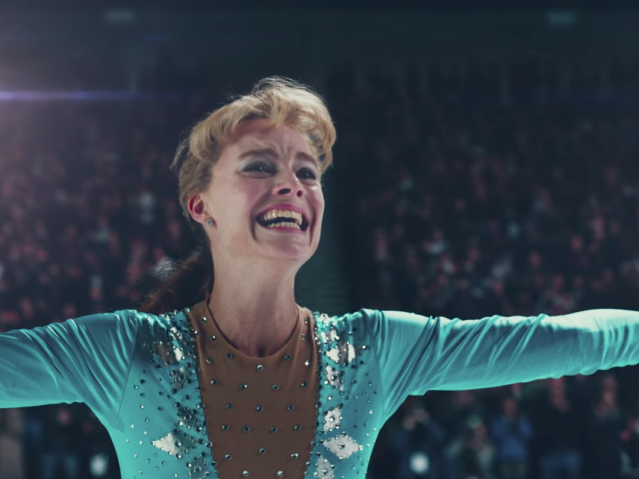