Winston Churchill: “You can not reason with a Tiger when your head is in its mouth.”

There should be no mistake made, this film is dominated by two elements, they are, Gary Oldmans career defining performance as well as the character he plays, that of Winston Churchill. Sure there are other actors involved and a writer and a director as well as a myriad amount of other people who you can tell all have done great work, but it is all, and I mean all behind Oldman’s interpretation of a true life one of kind man who has to be the person of the twentieth century. I am not reducing this film to just one performance although it does sound like I am, but this film exists in two shadows, one the aforementioned performance and two (which is bad timing) the Christopher Nolan directed “Dunkirk” (2017) which covers similar ground that here takes up about a third of the “Darkest Hour” (2017).

“Darkest Hour” is directed by Joe Wright who is no stranger to Dunkirk, he had a major section of his Oscar nominated “Atonement” (2007) devoted to the event, so it takes some bravery to return to it. Wright who has made some very good movies is coming off a major disappointment with the big budget bomb that was “Pan” (2015), so it is good to see him directing this film that is about a specific time in recent English history, that is so good, with many great performances as well as some excellent flourishes in his directing style. Wright has made all the right moves here, he has made a personal story about a major event in history, as well as giving Churchill the center stage and getting out of Oldman’s way who gives a master class in movie acting.

“Darkest Hour” begins in May 1940 Britain and France are allies against Nazi Germany. Before the German invasions of Belgium and the Netherlands, the Opposition Labour Party in Parliament demands the resignation of British Prime Minister Neville Chamberlain for being too weak to protect national security. Chamberlain tells Conservative Party advisors that he wants Edward Wood, 1st Earl of Halifax, as his successor, but Halifax does not yet want to become prime minister. Chamberlain must choose the only other man whom other parties will support: Winston Churchill.

Although he was right about the danger from Adolf Hitler, Churchill has a poor reputation from the Gallipoli Campaign and supporting Edward VIII during the Abdication Crisis. Parliament dislikes the new prime minister’s first speech promising “Blood, toil, tears, and sweat”, and Churchill refuses to negotiate for peace. He believes that the Germans are untrustworthy, but the French call him delusional for not admitting that the Allies are losing the Battle of France. Halifax and Chamberlain agree, and want to use Italian Ambassador Giuseppe Bastianini as intermediary to negotiate with Germany. The British Expeditionary Force is trapped at Dunkirk and Calais.

The construction of this film is competent and professional; Wright has constructed a narrative that boldly moves forward through not only some very real drama but historic events that if the audience is not aware of what happened they will have an idea once the film is finished. Coming to make this film there must have been questions about how long the period that is covered should be, how to tell what has happened before we are seeing Churchill as well as how much information should be supplied once the film has actually ended. The reasons for these questions is that there is no need to bombard the audience with too much information otherwise they will not only get lost, lose interest but will feel they are being lectured to – this movie has enough dialogue already. Instead we are explained certain plot points as they happen, so when the decision to make Churchill Prime Minister occurs we are being told not only the ramifications but also the ramifications behind the decision and all that happens after – it is a wise move to keep us informed and entertained. This is a tool used through the film, as well as moving the camera as much as possible to give the feeling of action and not just showing many old men sitting around talking.

The other device that is used is that of the audience substitute, the typist played by Lily James, it is no coincidence for example the she starts her first day with Winston as the film starts, as she is introduced to Churchill so are we. From there we see the story from two levels one from a micro level with the typist and then from a macro level with Winston himself, it is a useful tool to show two sides to a story as well as again making it easy for an audience to gain access to a story that may be foreign to them.

As I have said this film is built around the central performance of Gary Oldman who has been a presence in film both in the US as well as Europe and of course the UK. Oldman has been delivering great performance on television, the stage and in film, he is one of the greatest living actors, he has nothing to prove to anyone, he is one of the ultimate acting professionals working today – yet he has only ever been nominated for one Oscar, that was in 2011 for the great remake of “Tinker, Tailor, Soldier, Spy” (2011) – he lost then, should have won but now it looks that will be corrected with this defining performance. Of course Oldman looks the part because of some excellent make-up and wardrobe which goes along way to the feel of the character, but it is Oldman who inhabits the spirit of Churchill like few before him, he captures a spirit as well as an interpretation that feels like you are viewing a real period. Other greats that have portayed Churchill like Brian Cox, Michael Gambon, Timothy Spall and Brendan Gleeson have the look and size correct but they always feel like they are attempting to mimic the great man but here Oldman seems to differ with a naturalness not seen to date, by me anyway.

Something director Joe Wright has done to complement Oldman’s lead performance is to drop in talented character actors, that once Oldman enters a scene know this is his film and drop back, none of them steal scenes, wisely, as who could steal the floor from Churchill in full flight. So we have the marvelously underrated, back in the UK finally, Kristin Scott Thomas as Clementine his wife, Ben Mendelsohn as King George VI, Stephen Dillane as Halifax and Lily James as his typist all fitting in very well, knowing their roles, taking them seriously but all in service to Oldman.

In terms of style this feels like a claustrophobic film with many scenes in the war rooms that Churchill and his cohorts inhabited, there is the sense that the world is closing in on him, as he has to fight a war on multiple fronts with many enemies at home and abroad. In fact the most closed in scene is one of fiction where Winston travels on the tube to talk to his public, the brightest scene is towards the end of the film where he makes the decision to fight the Germans and gets the support of his wider cabinet – it is a scene that refreshes him and us to the point that we recognize some of the dialogue that follows in Parliament later on.

What I really enjoyed about this film was that it was unashamedly built around one character and one performance that works so well. It is also about a real Nationalism that works, it is about defending a country and countries against a real threat, and a person that could bring others together to work towards a common real goal where the outcome was the fate of millions of real people. I wonder how many leaders today would destroy others to defeat a perceived threat, without a real analysis of what would be a real outcome of twenty first century total war.

I can wholeheartedly recommend this film as a mostly accurate account of the first month of Churchill’s rise to power, as well the obstacles he had to face to start the turn the would eventually lead to World War II as well as the victory that would take place because of his leadership. If you enjoy dramas where the central performance will I have no doubt be Oscar winning then this is for you. 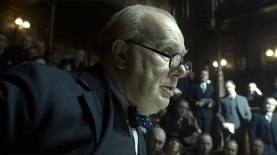 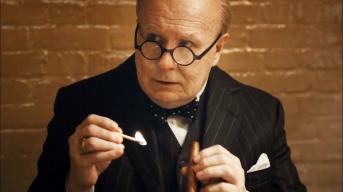 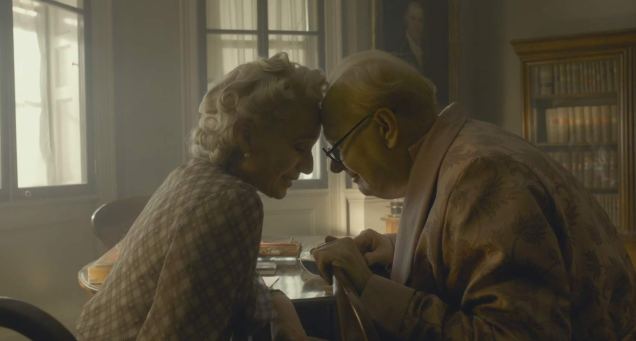