Written and Directed by: Rian Johnson

Luke Skywalker: “Breathe. Just breathe. Now reach out. What do you see?”

Luke Skywalker: “It’s so much bigger.”

Is it my imagination but now that production has been ramped up by Disney, and we can now expect to see a new “Star Wars” movie in some shape or from each year, has the anticipation been somewhat muted? I can remember not only when there were three years between productions but the long gaps between each trilogy as well, it is not surprising that each new beginning of a trilogy broke records in each decade it was released. It will be interesting to see how this new movie is greeted by cinemagoers as well as how successful it will be with critics. Although judging by additional screenings that are being organized this is tipped to break all time records.

This new installment already has a lot going for it to bait audiences, with the critical darling in Rian Johnson, who was hot off his own sci-fi excursion, the extremely well received “Looper” (2012), the final appearance of Carrie Fisher, the returning ingénue in Daisy Ridley, supported by the impressive John Boyega, Adam Driver and Oscar Isaac, the answering of questions asked or at least hinted at in the previous movie, Mark Hamill appearing as well as acting his tail off, as well as all the other elements that make a new “Star Wars” a must for fans to head to cinemas in droves. The good news is that this movie moves into some actual uncharted territory thanks to a script by Johnson that is not just a retread that we received with J.J. Abrams, which was fresh but in the end a remake –  with “Star Wars: The Force Awakens” (2015) – as well as yet another prequel in the interesting “Rogue One: A Star Wars Story” (2016). “The Last Jedi” (2016) was always going to be the movie that either moved things in a forward direction or just ended up being an uninspired rip-off, I am happy to report it is the former.

This movie sees Rey developing her newly discovered abilities with the guidance of Luke Skywalker, who is unsettled by the strength of her powers. Meanwhile, the Resistance prepares to do battle with the First Order. I am not going to say anymore about the story as it is fantastic so go and see it!

I don’t think it’s a secret but the production of the next two “Star Wars” movies, the Han Solo movie as well as Episode IX have had major problems, in particular with the directors that were hired to bring these two behemoths to the big screen. There is no doubt that when a director is brought on to one of these movies their vision is important but it must be in service to the overall vision of not only the producers but also the studio who is footing the bill  – usually in excess of US$200 million dollars. The gatekeeper of these movies was George Lucas who was also footing the bill, but now it is producer Kathleen Kennedy (one time protégée of Steven Spielberg) who is the public face as well as boss of the Star Wars Universe – she has no problem in getting her way, both publicly as well as professionally. Thats way it is great to see someone like Rian Johnson who is a writer/director, coming from independent movies and producing a movie that is as good as “The Last Jedi”. Johnson, has been able to expertly sail the waters that exist between the ports of the audience, the producers, his actors, the crew as well as his own lofty expectations, delivering a movie that is not only a worthy successor to the previous entry, but in its own way measures up to the greatest in franchise history, “Star Wars: Episode V – The Empire Strikes Back” (1980). This may seem like a lofty comparison, especially so soon after “The Last Jedi’s” theatrical release but there is no doubt that this is a great movie, one that not only looks back but has an eye on a future where this story must eventually conclude.

This movie must take into account a sprawling plot with many characters, possibly the most in any Star Wars movie, giving them all their own time in the sun as well as motivations that make them at least believable, if not they just become excuses for moving the story along to the inevitable conclusion. After “The Force Awakens” introduced a new generation of heroes and villains such as Kylo Ren, Poe Dameron, Rey, Finn, Hux and Snoke, we not only catch up with them directly after the last film but we are let in on their own stories, to an extent that is surprising for such a large canvassed movie. Johnson has expertly balanced not only the loss of a main character (the untimely death of Carrie Fisher), but deals with immense action, special effects as well as not taking his eye off the ball in terms of the very personal stories of Rey and Luke. Whilst not all questions are answered, we are definitely being moved along in terms of the story as well as the destiny of these people we have only been introduced to – Johnson has proven himself to be indispensible to this franchise as writer and director.

With these giant and outsized movies comes the expectation of large and outsized actors to complete the picture of how this story will unfold, after all these movies have to primarily be about people. As well as the established actors, there are a few new characters that have been added, there is Laura Dern as Vice Admiral Amilyn Holdo, Benicio Del Toro as DJ and Kelly Marie Tran as Rose Tico. There is also a variety of special celebrity appearances that follow the last movies Daniel Craig as a stormtrooper appearance, except Johnson has dialed them up to eleven. Normally I would find these distracting but the quality of this movie is so high that they are welcoming, but not something I would recommend other filmmakers follow. Now while each of these new characters does not take up a huge amount of running time or add a major amount of plot, they are all unique as well as delivering some great dialogue.

As you would expect the special effects are just great, there is a mix of both practical as well as CGI – there are also some extremely original sets, mixed with new creatures that will leave you breathless, they are all vivid, mixing natural creatures with their environments, the crystal foxes were my personal favourites. There are also homages to previous movies, in particular the already mention Empire, as well as some new space faring ships, in particular from The First Order. This is a well thought out movie with many resources given over to grand mise en scène as well as the most epic and personal space battles I have ever seen. Some of the explosions are gorgeous, one towards the end is epic in its silence and light.

Now I don’t want to let any spoilers slip but special mention must be paid to Mark Hamill who at 66 finally not only gets the movie he deserves, but lets loose a performance that is career defining – make no mistake this is his movie, he has saved one of his best performances of his career for this version of a jaded Luke, that could have easily been phoned in, but he delivers, showing an actor who has so much more to give to cinema. If you think you know the character of Luke Skywalker think again, this is the character we have been promised, Hamill delivers with what seems like ease, but then thats the trick, isn’t it?

Finally for this review, I have to mention cinematographer Steve Yedlin who has been working with Johnson since “Brick”(2005), which this shows, in particular the last quarter of the movie looks nothing like any Star Wars film that has gone before. Looking at the way in which characters, as well as action, is framed you would be forgiven for thinking you were watching a Western, or a movie from Asia, the wide angle lenses, as well as the colors are just breathtaking. This move will be nominated for technical Oscars at least – look for some other categories as well I hope, it deserves it.

I recommend this movie as a must see, in fact the bigger the screen the better, a Star Wars movie has never looked this good, or the story been so effective in pushing a story forward, going back to “The Empire Strikes Back”. There are so many moments where you might think you know what’s going to happen or even what’s happening in a scene, but then Johnson pulls that rug – it is also shows what the force is as well as how powerful it can be – something Lucas and Abrams never really did. Also whilst Poe Dameron is a hero, being set up as a leader, just count how many times he is right about something – he is just hilarious. Have fun with this movie they don’t come this good very often at all. 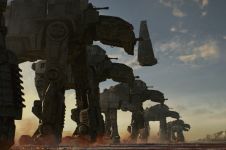 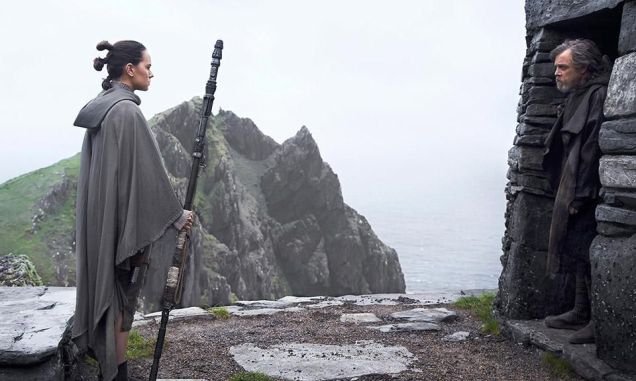