Written by:  Steve Conrad, based on the novel of the same name by R.J. Palacio

Auggie Pullman: [voice over] “I know I’m not an ordinary kind of a kid, I’ve had twenty-seven surgeries. They help me to breathe, to see, to hear without a hearing aid, but none of them have me look ordinary.”

I have to say that I did enjoy this movie about a boy who is born with a genetic disorder that means over the first part of his life he has to undergo constant facial surgeries to allow him to live a normal life. These surgeries leave him with extreme facial scarring that has the side effect of ostracizing him from society. This is the story of how he has to brave the outside world, face his fears as well as others misunderstanding of his condition as well as attempt to make friends with children who can be cruel – something we are reminded of constantly throughout this movie.

As you would expect from a movie like this the main character of the story is the child, Auggie, who through many interactions does find acceptance as well as becoming the hero of his own story, something that is sign posted from the very beginning. This is no knock on the movie as I expect that the end product is exactly what everyone involved was working towards. This was based on a work of fiction that was driven out of a real event, as well as incorporating many other ideas which all seem to work well, teaching tolerance as well as the acceptance of others no matter how they look on the surface – however this is all told from the point of view of white rich New York elites that for me simplifies issues of race, economics as well as level of education.

“Wonder”(2017) revolves mainly around August “Auggie” Pullman (Jacob Tremblay) is a young boy born with a facial deformity who has been in and out of hospitals for years. With the help of his mother, Isabel (Julia Roberts), and his father, Nate (Owen Wilson), he tries to fit in at a new school, Beecher Prep, and to show everyone he is just an ordinary kid and that beauty is not just on the outside.

This movie is a slick piece of work with a plot that is certainly not original but does attempt to broaden its horizons as well as make a comment on the way children are raised, the sacrifices that are made in the process of raising children, what can go wrong in terms of health issues, roles parent play and many other pertinent aspects of raising children. These are all noble points, but the one thing that is missed or ignored, which can be an issue for many movies is that the families as well as all their friends are wealthy which means many problems are solved by just waiving money at them. At no time whatsoever does Auggie or his family have to worry about money for rent, food, tuition, toys, computers or anything. In fact the family live in a Brownstone in New York that go for at least US$2.5 million, Auggie’s room by itself is larger than many apartments, he has his own computer, television, huge mural and many other ‘toys’ most children would kill for.

The roles of the parents are unclear, they are obviously liberals, sending their son to a liberal school, where the curriculum that is taught is again enriched by money as well as of course pointing out how left thinking they are with a female science teacher as well as an African American teacher, peppering the class with other cultures – although there is the point made that the ‘baddies’ are nebbish white new money conservatives. These are almost all tropes that have been transported from any number of genres and other family movies. Back to the parents, the mother played by A-lister Julia Roberts is just as you would expect, the perfect mother who can put up with her husband, is able to give her son the best home school education, he is of course smarter than all the other children he goes to school with, makes perfect food – looking extremely healthy – and is able to not blink an eye when her daughter brings home someone non-white. The father, played with charm by Owen Wilson, is the funniest guy in the room, has a job that goes unexplained but rakes in the money to afford their lavish lifestyle. The only real chink in the armor of the family is the daughter, Via, played by Izabela Vidovic, who feels like she has been sidelined by Auggie’s issues, as well being ignored by a childhood friend – of course her issues are completely resolved by the end of the movie, much like everyone else’s – the typical Hollywood movie as well as a complete fantasy based on a fictional story.

The novel that this movie is based on is completely fiction, it was written by a woman that saw a child with a facial deformity in an ice cream shop with her own child. In thinking that her child would be upset and cause a scene she attempted to remove herself from that situation, in doing so she caused a huge scene. This is not necessarily a negative aspect but it does lead into the movie itself as it concentrates on one aspect of a story but really white washes any other issues the typical family might face – which this one really does not.

In saying all of this about “Wonder” and it may seem I am being overly negative but there is still a lot to like about the movie. For one it is a family movie that should appeal to almost any age, be they five or above. This movie speaks to so much about what it is like starting anything new, there is fear, trepidation about the unknown, and that is before taking into account the feeling that you are different to everyone else – this movie deals with that along with the knowledge that this will never change. It teaches us that acceptance is important as well as the idea that there will always be people that accept you for who you are, as well as those who never will. These are all positive messages that cannot be underestimated by viewers of this very well executed movie.

Stephen Chbosky who also directed “The Perks of Being a Wallflower” (2012) here has almost everything a director could want, a compelling story, an excellent cast as well as a great location. He puts them all together to create a unique story centered around breakout star Jacob Tremblay who so impressed with “Room”(2015), here he almost carries the entire movie with what looks like ease. Of course there is a lot of work he must do which is easy to see once you compare his performance to some of the other child actors. The rest of the cast including superstar Julia Roberts and Owen Wilson do exactly what you expect which is to show their supercharged talents to bring more urgency as well as emotion that helps to highlight the issues that their son faces.

I can recommend this as a movie to see in cinemas as a family, it teaches without being too preachy as well as giving children the agency to make decisions that have a direct effect on not only their lives but others as well. 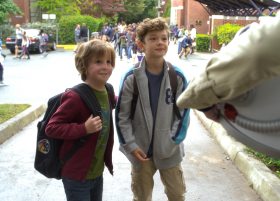 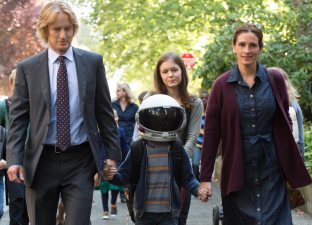