Mr. Davis (Shopkeeper): “I don’t know why people pay money for these, my 5-year-old could do better.”

Everett Lewis: “Maybe. Maybe he could, but he didn’t – Maud did.”

Films about real people can be routine affairs, especially when they revolve around subjects that end up feeling self-important or, are in actuality quite dull. I often do not see the point in putting lives onscreen that have already been documented in news programs or documentaries. So it is when a film arrives like “Maudie” (2016) that you realize that a persons life is not just measured in money, or fame, but in what they do with their time, and sometimes what they leave behind. “Maudie” is based on the real life of Maud Dowley an original if ever there was one. Maud was a painter in the town of Marshalltown, Nova Scotia who left behind a legacy that lives to this very day, this is a film worth paying to see.

“Maudie” is a truly touching, as well as moving film, that unlike many other of its genre does not douse itself in nostalgia or show a life that was better in the ‘old days’. In fact if anything it illustrates just how hard life was, as well as the gender politics that may have existed in some small isolated towns in the 1930s. “Maudie” also goes out of its way to paint a picture of the harshness of the main characters reality – she is not only being controlled by an Aunt, but is actually financially victimized by her brother, something she never forgot or recovered from. It may appear that Maud moves from bad to worse, but in actuality she joins with a person who had not had a great time of it either.

“Maudie” is all about Maud Dowley an arthritic woman who having lived with her Aunt Ida and brother Charles is told that her brother has sold their family home, which their parents had left to him. In the meantime, Ida berates her about visiting the local nightclub. The next day at the local store, Maud sees the inarticulate and rough fish peddler Everett Lewis place an advertisement for a cleaning lady. Maud answers the call and takes the position for room and board.

This is a truly remarkable film about an original woman, the time she spent with her husband who were more or less forced together by circumstances, somewhat out of their control. They forged a loving relationship that lasted decades, it produced not only works of art, but also a home that ended up unknowingly being her lifetime’s work that once she passed away was (and is) a testament to her talent. This film treats not only her but her husband with respect, even when as an audience member you may feel some animosity towards him. There are definite gender roles at play, that are fluid, which is impressive considering this film is set from the 1930s onwards. We witness a nice scene towards the middle of the narrative, where after Maud is painting more full time, her husband is peeling potatoes, something once you are introduced to him, he would never do – that’s what he initially hired her for – a truly lovely moment, played authentically by both leads.

“Maudie” is a co-production between Canada (where it was filmed) and Ireland; this shows onscreen as many shots feel like they have been lifted out of an Irish landscape. The film is directed by Aisling Walsh, who has a long history in both English television as well as film – this is not her first go around. In saying that Walsh has her steady hand on this film, it holds together so well, looks amazing and sounds great. Walsh knows exactly what she is doing as well as what she wants to show onscreen, a brilliant painter who had a difficult life – with a man who had no idea how to treat her or to understand how to deal with issues in life that arise for everyone. He was a man who did not know how to express himself, lucky he had Maud who not only knew how to feel, but she could express it in her paintings both on canvass as well as in her home. It would be easy to say that the landscape is a character in the film, but it is actually the home not the landscape that is the third main character. Interestingly it is the couple’s home that is the true lasting proof of their love and relationship – it is now in an Art Gallery, fully restored in Nova Scotia since 1984.

The two main actors that have been cast are extremely experienced in a variety of genres, but this film sees them playing real people, where they have many of their mannerisms, this makes up for the fact that they really look nothing like their subjects. Not that this matters one iota, Sally Hawkins as Maud holds the camera the entire time she is onscreen, she is captivating and her talent has never been more evident as it is in “Maudie”. To me it felt like she was authentic as well as fully in command of every scene – it is a showy role but it never felt like she was out of her depth – an Oscar worthy performance. Hawkins foil is the ever-reliable Ethan Hawke who is so talented that he seems to coast through each scene with ease, but he knows he is there to support the main player, Hawkins. At this stage of his career it should surprise no one that Hawke is at home onscreen here as much as he has ever been – I hope his performance is highlighted as one of the best of his career.

Something that is often overlooked in film is the music, but here it is integral to the plot, it helps to move the story along without telling an audience how to feel. So it is unsurprising the composer is Michael Timmins from the band ‘Cowboy Junkies’. Like their best music this soundtrack is subtle, not overbearing but contains music that is present in each scene that it is needed to be in. There are also some vocalists appearing and the movie closes with a ‘Cowboy Junkies’ song “Something more beside you” which like the film is understated as well as moving.

This is one of the better films that has been released this year, if it were not for its limited platform and lack of appearances at festivals it may have been an Oscar contender, especially for Sally Hawkins – it does appear she will be making an appearance at the Oscars with another film so all is not lost for her. I would say that if you want to watch a movie that illustrates what life can be about with its triumphs and tragedies for two people that find each other then this is the film for you – I can highly recommend.

“Maudie” is out now on DVD. 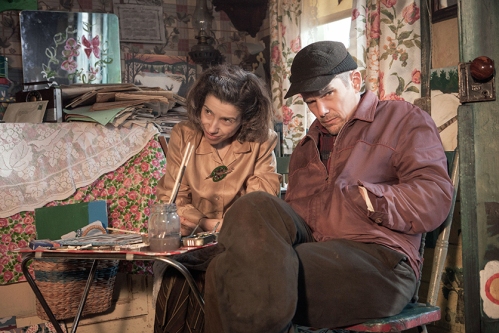 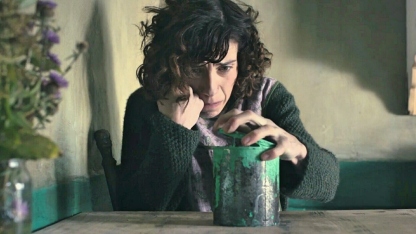