When watching this film I was struck by the majesty of its beauty as well as the eeriness of its silence. I also found it difficult to believe that this was Michaël Dudok de Wit, the Danish writer/director, first full-length film after four other animated shorts over the past fifteen years. This film’s plot is simple, it has been told many times before, a ‘Robinson Crusoe’ affair, which has been animated, the difference and strength being it  is able to transcend formal story telling by making a leap into the mind of a man who has no hope of rescue. His only possible salvation from going mad is to embrace his surroundings, by becoming a character in his own life. This is a film where survival is the most important objective, not only physical survival but also survival of the mind and the soul. There are also elements of wish fulfillment throughout the film which we see mostly in dream sequences, as well as from the survivors point of view – which like all narratives told from one point of view can be deceptive.

“The Red Turtle” concerns a nameless man set adrift by a storm wakes up on a deserted island. Finding fresh fruit and water, as well as variety of animals and a sweeping forest of bamboo, the man decides to leave the island. The man builds a raft from bamboo, and attempts to sail away. However, an unseen sea creature destroys the raft, forcing the man back to the island. Attempting to escape with another raft, his plan is foiled again by the sea creature. Trying a third time his raft being destroyed again, but once he is in the water he finds a female red turtle facing him. The turtle doesn’t harm the man. The man retreats back to the island.

That evening, the man sees the red turtle crawling on the shore, attempting to go inland. In revenge, he hits the red turtle on the head with a bamboo stick, and pushes it over on its back. After halfway through building another raft, the man starts to feel guilty about leaving the turtle upside down, so he catches a fish and tries to feed it to the turtle, but finds that it has died. The turtle’s shell splits down the middle during the night, and to the man’s surprise, the turtle turns into a woman.

The plot to this film is simple in its concept, but the real revelation is in the magical narrative, which is at once relatively abstract as well as having hints of a sort of magical realism. This is of course accentuated by the fact that it is animated with such care that the story envelopes the viewer with ease – in effect we are watching the final part of a mans life unencumbered by technology, any modern comforts, with the only comfort being satisfaction from his own primal nature. It asks questions about what it means to be a man, a human being, what we will do to survive and what it is we really need to have in a full and effective life when the spark that holds us together is so finite. In the story of his own life this man who is isolated from the rest of humanity attains what many lack, a family, not only a human one as you can see occurring in front of your eyes, but an understanding with the natural world that says while you can try and control nature it will always have the final say, whether in terms of the natural environs or the lack of respect shown when ‘man’ may be under the misconception he is at the top of the food chain.

The film’s story is complemented with breathtaking animation by a team that are aware of what they are required to show as well as how they are required to get this personal narrative across. The fluidity of movement of the human as well as the animal characters is so breathtaking that it defies description, whilst obviously not photo realistic I couldn’t help think about how real they all seemed without being distracting to the narrative. The movie uses static backgrounds with movement within the frame to highlight not only importance, but adding another aspect of realism that adds to the movie in terms of how we should view this new world, while it being an unknown element within the story.

The way in which the story progresses from the introduction to the ending, visually through the animation is interesting in itself. The palate of the animation moves from a washed out looking landscape to one that is not only full of color but boats a point of view that enhances the natural world in which the man is now living – he is no longer apart from the natural world but is living within it, becoming part of it, learning from his many mistakes to co habit with the flora, fauna and other animals – including some very close to home.

The other aspect that I found compelling was that no matter what the man ultimately needs to survive, it is supplied, for want of a better word, by nature. This is almost immediately illustrated when he first lands on the island – when he realises he is thirsty, he finds a puddle of water, no sooner does he start slurping it up than it begins to rain. Not to give away any spoilers but his entire life is built around the island, so when he requires something, even when he does not realise it, is somehow supplied – it is like he is becoming one with his environment. The other beautiful aspect of this film is that for a man to be stranded on an island he actually has a full life, having a family, once again without spoilers he goes through many life experiences any father or husband might have, this is a triumph of story telling that is not seen very often at all – it is a true experience.

This movie is a masterpiece; my only refret was that I did not see this at the cinema at the time of its initial release in 2016. If you have not yet seen “The Red Turtle” you need to buy this DVD, it has immense watchability and will have you transfixed for its eighty minutes running time. If you have seen it you should have it as part of your home library.

“The Red Turtle” is out now on DVD. 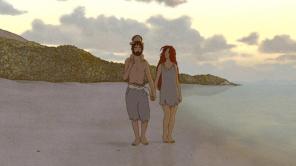