Mary Shannon: Since 1970, the Federal Witness Protection Program has relocated thousands of witnesses, some criminal, some not, to neighborhoods all across the country. Every one of those individuals shares a unique attribute, distinguishing them from the rest of the general population. And that is, somebody wants them dead.

There is no doubt that there are far too many scripted television series being produced than any one person can watch from week to week without making it a full time job. So it is great when something surfaces that did not get an airing here in New Zealand, then turns up on a secondary source such as what is considered an old fashioned medium, the good old DVD. I am pleased to say that is exactly what has happened with “In Plain Sight” (2008 – 2012), a vehicle for the excellent character actress Mary McCormack who came to fame as Howard Stern’s wife in “Private Parts” (1997), then going on to appear in a variety of projects. Here McCormack gets to not only play drama, but comedy as well as kicking ass as a US Marshall, a cleaner female counter-part to “Justified” (2010-2015) if you will.

The series itself revolves around Mary Shannon (Mary McCormack), a Deputy United States Marshal attached to the Albuquerque, NM, office of the Federal Witness Security Program (WITSEC), more commonly known as the Federal Witness Protection Program. Shannon must find ways to balance her professional life of protecting witnesses, her professional relationship with her work partner as well as her problematic personal life.

This is for all intents and purposes an episodic show with procedural elements that begin and end in the same episode (with few exceptions) much like many shows of its ilk. What “In Plain Sight” does extremely well is to balance the main characters personal life with her working situation in a way that leaves you wanting more – it really is less about being a US Marshall than it is about a daughter, sister, partner and lover, struggling with life as well as dealing with people who have been shunted out of their own lives many times because they have been in the wrong place at the wrong time.

The very defining thing that I found to be different from other shows that revolve around either the police or crime or both are the characters that have been created as well as the magnificent casting that has occurred to bring these to life as well as inhabiting them with some honesty that can be lacking in other generic shows.

Firstly, the main character Mary (Mary McCormack) is a completely capable officer, a nonconformist and uninterested in typical feminine wiles. Mary has trust and abandonment issues that lead her to have difficulties with relationships due to a difficult childhood resulting from her father’s abandonment and her mother’s alcoholism. Secondly there is Marshall (Fred Weller) who is a fifth-generation Deputy U.S. Marshal, Marshal Mann is Mary’s partner, as well as her best friend, and occasionally appeared to desire more than her friendship as the series progressed. He seems to know a little about everything, what Mary calls “useless information”, and is rarely ever speechless. The only time this has ever happened was in the season-three episode “Whistle Stop”, when he discovered Raphael and Mary had broken up, leading her to declare him “verbally impotent”. Friction between Marshall and Mary occurs at times, often due to Marshall’s cerebral approach and Mary’s gut instinct, though both are extremely protective of witnesses and each other. Lastly there is their boss Stan McQueen (Paul Ben-Victor), : As chief inspector for WITSEC’s Southwest region, Stan is Marshall and Mary’s boss who is flexible and a stand-up guy, quickly backing up both Marshall and Mary when they hit trouble. Stan likes to stick to official WITSEC doctrine as often as possible and is reluctant to bend the rules without authorization.

That leads us to Mary’s relationships at home, these are lead by her mother Jinx (Lesley Ann Warren) who is an alcoholic as was abandoned by her bank-robbing husband to raise her two daughters alone. Finally there is Brandi (Nichole Hiltz) Mary’s younger sister who is very much her mother’s daughter and the baby of the family. She lives in the moment and was originally involved with a shady man named Chuck. Despite this, she looks up to Mary and, at times, sees her as an example. She also tends to be the more mature figure in her relationship with her mother. Brandi is loyal to a fault, but is slowly developing a conscience independent of others’ approval.

My stand outs as well as scene stealers for the entire series are the well cast Nichole Hiltz and the amazing as well as legendary Lesley Ann Warren who not only are foils for Mary McCormack, keeping her on her toes not only in character but she cannot afford to fall asleep or coast with these two as scene partners because they are that good in their jobs. They both know their own characters inside out, they breathe them, with what could have been cut out archetypes, these two actresses from very different generations own them as well as feeling plugged in to what they need to do in each scene they appear in. This show is worth watching just for them.

The series is very well directed, mostly by Dan Lerner, but eagle eyes will spot episodes directed by veterans, as well as film directors such as John Badham, Ernest Dickerson, Stephen Hopkins and various other great television directors – this leads to well rounded and inventive episodes. Not only that but they are also able to bring the best out in not only the cast but the crew who work behind the scenes. I am a big fan of many of these directors and after watching episodes that could be humdrum in others hand you will appreciate may of these, particularly if you binge this show, like I did.

If you are looking for a new cop show that is just waiting to be discovered then I recommend this highly, it will keep you entertained with fairly simple storylines but it is the characters that will keep you coming back with all of them facing real growth through the four seasons that are available right now.

“In Plain Sight” seasons 1 to 4 are available now in a box set on DVD now. 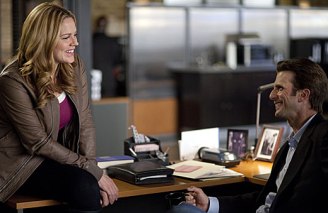