Samuel Mullins: “My daughter has been dead for a long time.”

I have gone on record to say that 2017 has been a very good year for the Horror genre, in particular for the low budget horror, the most obvious examples being “Get Out” (2017) and “Split” (2017), with no coincidence at all that these are both Blumhouse productions, to a larger or lesser degree. However, with the release of this week’s sequel to “Annabelle” (2014) we see a different approach from producers James Wan and Peter Safran, as they have created an entire Universe spun off from the hit horror movie “The Conjuring” (2013). Within that first film was a ‘cameo’ from a doll called Annabelle which was followed by a warning that she was never to be touched as it was pure evil – audiences were curious as to her story and so the first “Annabelle” was produced, it was almost as big a hit as “The Conjuring” so a sequel was always on the cards – three years later it has arrived in the form of a prequel – turns out that was a wise decision.

When “Annabelle” was released to much fanfare it was not as well received as its parent film, or its sequel “The Conjuring 2” (2016) which upped the scares as well as story, once again introducing a character known as the Nun – we will see that spinoff film in 2018. With this sequel the producers have followed a similar pattern to an earlier Blumhouse movie, “Ouji” (2014) which failed with critics as well as audiences, instead of forgetting about it the producers went ahead with a sequel “Ouji: Origin of Evil” (2016) which was both a critical as well as box office hit. Blumhouse wisely hired a director, Mike Flanagan, who had a string of independent horror successes to bring his own originality as well as create a prequel for the series – here Wan and Safran have done a similar thing with their Annabelle series, by bringing in David F. Sandberg who had his own huge hit with “Lights Out” (2017) which was received extremely well – we shall see if this gamble worked or if this is the end of the creepy little doll.

This movie revolves around Samuel Mullins, a dollmaker, and his wife Esther, whose daughter died twelve years earlier, open their home to Sister Charlotte, a nun, and several girls from an orphanage that has been closed. The dollmaker’s possessed creation, Annabelle, sets her sights on the girls turning their shuttered shelter into a storm of terror.

Over the years there have been many horror movies devoted to the ‘doll as a conduit’ for evil forces as well as unleashing these forces on unsuspecting victims. The most obvious as well as most successful are the ‘Childs Play’ (1988-2017) films where a villain has his consciousness transferred to a child’s doll, from there havoc is unleashed and has been over seven pretty successful movies. I grew up with that particular franchise but I never found it that scary, more humorous than anything else, however the ‘doll’ film that scared me the most, and still does, comes from a television movie called “Trilogy of Terror” (1974), which contained three stories, the most frightening named ‘Amelia’ written by genre legend Richard Matheson, about an African doll that comes to life and terrorizes actress Karen Black – it is thoroughly excellent, frightening and to this day I find it hard to believe it was ever aired on television.

So we come to the latest in the possessed doll sub-genre that has originated from another movie, as has been stated. This doll is different to other doll movies where the doll Annabelle, is based on ‘truth’ (although the Warrens who have this doll have pretty much been discredited) in that this doll has a demon attached to it, that hunts for human souls and seems completely indestructible. The figurine acts as the maguffin of the first “Annabelle” which may have been an error as there is an over reliance on its looks as well as a fairly vapid family that then relied on tropes that have been used since the very first horror films, in actuality the first film seemed like a copy (not a good one) of the melodrama that worked so well in Polanski’s “Rosemary’s Baby’ (1968).

What this sequel does different as well as I might add better, is to put the physical doll to one side for most of the film while concentrating on the being that is behind the power – the demon that has made itself at home within firstly, the family unit then, in the wider adopted family that comes to live in the large spooky house. Making this a prequel was the best thing to do, then the film could concentrate not only on the demon but also the relationships between the girls that live in the house, as well as the grown ups who are supposed to be in control, which is what gives the story any real weight for the audience to draw on – which is good because this is not a perfect film, although it is a step up from the first entry.

There is no doubt that director David F. Sandberg although short on experience is a very good director as well as being able to execute a script with some real flare. He produces not only some real scares not relying on jump scares or cuts by building as much tension as he can through long sequences where as an audience member you are not totally sure where he is going with it, which is refreshing. It also harkens back to his “Lights Out” movie which utilized some of the same techniques. I do not give away spoilers but I did enjoy the fact that this movie starts off on one character that you may think is going to be the hero of the story but there is a twist on the familiar that I found welcoming, which leads directly into the storyline of the first film, which makes that first film now seem a little better through this linking.

Of course this is not the most perfect film, I was let down by some of the situations that either were too much of a leap, or simple logic problems which seemed either too weird or coincidental, or just defied how people behave in given situations – it also relied heavily on tropes, which in itself is not a totally bad thing, but when you rely on them to push your story forward seem rather silly. In my mind this is down to the writer, Gary Dauberman, who unfortunately wrote the first “Annabelle’, so all the negative things about that film have been transferred to this one, albeit they seem to have been mitigated by the new director – which just shows you how important it is to have a director that can transcend the script as well as being to make an impact with shot selection as well as using framing devices.

To be honest it wasn’t until I had a think about this movie that I decided I did actually like it, but in comparison to the previous film as well as “The Conjuring 2” this was quite refreshing and unique, particularly in an R-rated movie. The reason for this from my point of view was to make the children in the film feel believable in particular the two younger girls who turn out have the pivotal roles – which is refreshing, more so in the horror genre than any other. I recommend this movie for not only the people who love horror, but for those that were fans of “Lights Out” as it does show a progression from the low budget to the mid budget level, it bodes well for Sandberg’s next movies. 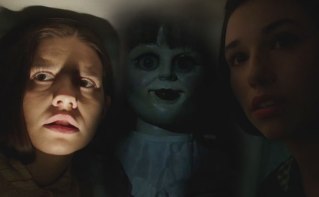 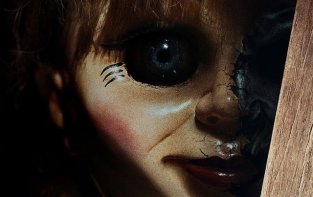 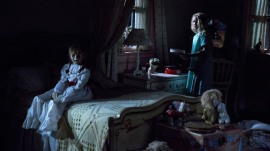