Colonel: “All of human history has lead to this moment. The irony is we created you. And nature has been punishing us ever since. This is our last stand. And if we lose… it will be a Planet of Apes.”

This time Caesar (Andy Serkis) and his apes are forced into a deadly conflict with an army of humans led by a ruthless colonel (Woody Harrelson). After the apes suffer unimaginable losses, Caesar wrestles with his darker instincts and begins his own mythic quest to avenge his kind. As the journey finally brings them face to face, Caesar and the colonel are pitted against each other in an epic battle that will determine the fate of both of their species and the future of the planet.

I find it difficult not to talk about how far these three ‘Apes’ movies have come without addressing the way that technology has been used not to just provide some spectacular motion captured effects, but how well they are deployed within their environments. There is no doubt in my mind that without these cutting edge effects these films would not be able to exist as well as they do – by developing these effects the story can be so much more expansive as well as being able to build three dimensional characters that are able to emote without the use of dialogue – something hinted at in the first film, attempted in the second, but now fully embraced in this third, possible final entry with a movie that really has to be experience on the big screen. This film is a true achievement in harnessing motion capture technology– I was agog at some of the sequences where I have no real clue how some of the action was done – it is truly amazing, Matt Reeves and his team should be applauded for the best film of the year that encompasses such a large scale as well as layered storytelling.

Once again the star of this film, as well as the two previous is the wonderful Andy Serkis – he who was catapulted to fame as the nasty Golem in the ‘Lord of the Rings Trilogy’, and cemented his credentials in “Rise of the Planet of the Apes” (2012), I naively thought that was a nadir for him, how wrong I was. If ever he was going to receive some awards consideration it is for this iteration of Caesar, who he brings to life in ways not seen before on the big screen. The Caesar of this movie is a very different beast indeed (no pun intended), he is grappling with the effects of his fight with rival Koba, as well as being a father to two boys, maintaining his leadership, fighting off the invasionary forces that were hinted at at the end of, “Dawn of the Planet of the Apes”, led by ‘The Colonel’ (Woody Harrelson) – it is a full basket that he has to deal with. When he is faced with some extremely horrific events you wonder if he will be lost to the path that seems to have been predestined by Koba, of course the complexities of his character mean that his journey into darkness will, in the end not define him – it is only Serkis who has lived with this character for the past six year could play, which he does to its ultimate conclusion – has there ever been a hero like Caesar?

The film’s other highlights within the cast are of course Woody Harrelson as ‘The Colonel’ and the big surprise (well it was to me anyway) Steve Zahn as ‘Bad Ape’. Harrelson is the main protagonist who you hear on a radio before his actual introduction where he performs an unthinkable act that kicks off the main thrust of the plot. Harrelson shines as a man thrust into a position where he has made some Kurtz like decisions – much like that Colonel from the film “Apocalypse Now” (1979), his actions are made by an unhinged mind in a situation he could never have foreseen. Zhan like Toby Kebbell in the previous film brings something unique to a film full of one offs, a shy scared timid ape holds the key to the plot as well as Caesars salvation along with a remarkable little girl, played by Amiah Miller.

Writer/Director Matt Reeves (as well as the original writers of “Rise of the Planet of the Apes”) has always had the original five films hanging over him with decisions that had to be made about how closely he would adhere to some of the history talked about in those films. The character of Caesar does make an appearance in those movies, but the timelines that have been embraced here are different to those in the original franchise. What Reeves has done, more so than what ‘Rise’ did where there were lines of dialogue lifted from the original “Planet of the Apes” (1968), is to bring in reasons for where the human/ape society ended up. In this latest film Reeves tackles the reason why humans are savage like in the future as well as possible reasons why there were so few humans in the future, when the Earth becomes a planet of apes. The last two movies that have been written by Reeves are so well plotted that you as the viewer don’t even notice the fact that for all intents and purposes there is a cliffhanger at the conclusion of “Dawn of the Planet of the Apes”.

One of the great moments is the allegory that exists within these mvies that began in the second film and is accentuated as well as being advanced in this new movie. The ape as not only Native American but as any indigenous population attempted to be removed or wiped out by a technologically advanced civilization is familiar and something we are seeing today with the decimation of animal species worldwide. The apes even like the Native Americans have found a sanctuary in a desert which they must get to under their own steam, they are interrupted by the humans as well as meeting death at their hands. Reeves has done an outstanding job keeping the plot on point, relevant as well as keeping an eye on the future not only of the world he has built but on whatever is to come from future writers and directors.

The film is a stand out this year with its subtle nods to not only other ‘Apes’ films but also to other similar genres – this is a movie for the times we live in as well as times past – Reeves is a master film-maker working within the confines of not only a genre but a established franchise that has more good movies than bad. This has to stand as one of the best out of an eight film series, something that has to be acknowledged when the origins of this entire series comes from one book written fifty years ago. I believe this would make author Pierre Boulle proud not only of where his original novel has gone but what it has inspired. Brave Matt Reeves and 20th Century Fox – this is indeed a brave decision for a company to make, it is alos a lesson to be learnt when their other franchise, Alien, seems to be faltering at the finish line. 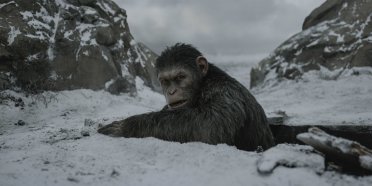