Doc: “So here’s the thing, I’m looking at some of the country’s finest thugs and of course young Mozart in a go-cart over there. People love great bank robbery stories, so let’s give them something full and brazen as fuck to talk about over their lattes.”

After much anticipation Edgar Wright’s career course correction has arrived, after leaving the super hero project “Ant-Man” (2015), (which in fact turned out very well thank you) he has brought to the screen an almost entirely original proposition. In seeing this weeks new release “Baby Driver” (2017), we can only wonder what his vision of the diminutive super hero may have been. To be frank I was shocked watching this new film as it hits the mark on almost every cylinder, it is full of action, drama, comedy, music and thrills, all packed in at under two hours, pedestrian by the lengths of some of the movies released this Summer – especially considering some of them go absolutely nowhere.

After all the shenanigans with mates Simon Pegg and Nick Frost, as well as the overtly pop culture referenced work of “Scott Pilgrim vs. the World“ (2010) it is great to see him create something (albeit with a nod towards Walter Hills now classic “The Driver” (1979)) original as well as slick not forgetting smart. This feels like the movie that Wright has promised for so long after the double hits of “Shaun of the Dead” (2004) and “Hot Fuzz” (2007). With “Baby Driver”, Wright has built a film around solid if not extreme characters, that are all driving towards goals that while not unified are understandable in the world they are living in. When you watch this movie it works because of the nature of the narrative that builds the plot which is the use of scene appropriate music that frames almost every scene, whether believable or not. This is a fantasy, a dream that asks us to leave real life at the door, welcome the madness as well as holding on to our seats for a truly unique experience.

The film is centred around Baby (Ansel Elgort), a young getaway driver in Atlanta, Georgia. When he was a child, a car accident killed his parents and left him with severe tinnitus, which he blocks out by listening to music. He also records his everyday conversations and remixes them into songs using vintage audio equipment. Baby works for Doc (Kevin Spacey), a mastermind heist planner, to pay off a debt he incurred after stealing one of Doc’s cars. Baby lives with his deaf foster father, Joseph. After pulling off a robbery, Baby is told that the next job will pay off his debt. Baby meets waitress Debora (Lily James) at a diner he frequents, and they fall in love.

Wright has done something few writer/directors are capable of, that is he has reinvented his style to accomodate a new movie. Now while the pace of this film is quick, the actual editing and the way we shift from scene to scene is not. This is in contrast to Wright’s previous films, pretty much all of them, where the audience would be taken from scene to scene with a frenetic style that may have been hiding some of the flaws that were hidden within the plot. Whilst music has always played a large part in Wright’s movies this is the first time he has injected them into the narrative without them being a crux that the move relies on. What I mean by this is if you remove the music from this movie you still have a heist/chase film. With the music added you are witness to a deeper story that invigorates the characters motivations – something special indeed.

The plot of this movie is something audiences have seen many times before, you know, the one about a person trapped in a situation that they cannot extricate themselves from, but can see a way out, particularly after meeting a third party, which normally turns into their love interest. However, this films plot is framed by the well thought out, as well as the soundtrack, full of deep cuts which opens with the toe tappingly great Jon Spencer Blues Explosion ‘Bellbottoms’, where Baby and his crew rob a bank, this plays while they make their outrageous getaway, something that hints at the pace for the rest of the film. The opening also makes a statement about the movie as well as Wright saying “I have arrived!”, in the loudest way possible. Most, if not all the music is diegetic which is unique in itself without the movie being a musical, although at times this movie has many of the same beats as a musical – witness the opening credits sequence with Baby moving in a single shot to the original ‘Harlem Shuffle’, as well as the ending all choreographed to the amazing ‘Brighton Rock’ by Queen. Baby moves as well as drives like a dancer, and the car fu (if you will) beats almost anything seen in the ‘Fast’ franchise, seemingly without the massive CGI that is needed for those behemoths.

Talking about Baby, played by relative newcomer Ansel Elgort, is a character that almost reaches the heights Wright had for him, but maybe his face is a little too baby, without the lived in physique another actor may have had – they try and rough him up by scarring him, but he is almost too pretty – maybe even prettier than leading lady Lilly James – who in my mind seems a little too twee for the part as well as out of her depth in the role. However none of this really matters when the stars come out to play with some of the best dialogue around, they chew it up and roughhouse with each other like the pros they are. Witness Kevin Spacey as ‘Doc’ (an obvious homage to Steve McQueen) who runs the show, Jon Bernthal as Griff (seen all too briefly) and Eiza González as Darling a a lovingly twisted partner to the scene stealing (saying that in this film is a real compliment) Jon Hamm as Buddy.

Speaking of the absolute best performances, they come from the aforementioned John Hamm as Buddy and Jamie Foxx as way too crazy Bats. It can be no mistake that these two actors have the best roles as well as give the best performances; they are polar opposites in this and are set up against each other for most of their time onscreen. However, it is Hamm in the bigger and more defining role that steals the entire movie – including the music. Hamm shines like no other time onscreen in his career, here he is not relying on his winking at the camera or chiseled looks, it is just his menace as well as his complete understanding of Baby that makes his part in this film timeless. Foxx is excellent as well in a dangerous role that sparks the entire third act into motion as well as offering some menacing looks and dialogue, he is always great, but here like Hamm he is off the hook, unlike anything I have seen him in since possibly “Django Unchained” (2012). These two performances are reason enough to see this movie at the cinemas.

Judging from the box office success of this film, quickly approaching US$100 million at the US box office alone this will be one of the bigger success of this Summer season, given that this is an original movie, much like “Dunkirk” (2017) which at this stage looks like it too will be a big success. It can be no coincidence that these two original films (both written and directed by Englishmen) will be surpassing expectations, unlike the glut of sequels, reboots and comic book movies which have mostly lagged behind expectations both critically and financially. What does this say about the tastes of audiences, for one thing maybe its time that more original movies were being made and that filmmakers should be left alone to create original properties?

If you want to see an excellent action/thriller movie this year then this will be the one for you. You will definitely get a kick out of the music as well as the interplay with Baby, as well as the rest of the cast. This is a modestly budgeted film with a cast that is worth their weight in gold. You would be crazy to not see this on the big screen with the volume turned up to 11.

Oh yeah, and look out for the great Paul Williams dressed in a white suit – priceless. 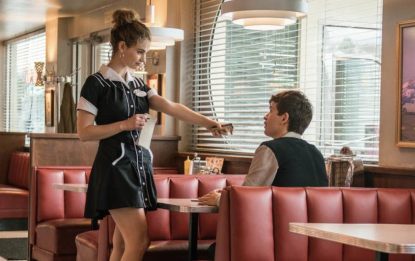 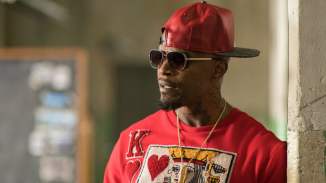