Philip: “Whatever it cost my cousin in pain and suffering before he died I will return with full measure upon the woman that caused it.”

If you have never heard of author Daphne Du Maurier that is a loss you can solve by going and finding some of her books, reading them and coming back to this review. Maybe start with the novel that is the basis for this review, ‘My Cousin Rachel’. In fact you may have seen her two most popular works as Alfred Hitchcock films, the timeless “Rebecca” (1940) as well as “Spellbound” (1945) which had hallmarks of Du Maurier’s work, the supernatural, lost love and a heightened sexuality in many of her creations. Some of these can also be found in Roger Michell’s film adaptation “My Cousin Rachel” (2017), which will have you enthralled not just with the story but the performances of the leads Sam Claflin and Rachel Weisz. There is a real air of mystery to this story that strikes a note with modernity as well as the time it is set in.

The film is primarily concerned with Philip (Sam Claflin), a young Englishman who finds his cousin Ambrose (also played by Claflin) dead after traveling to Florence, Italy. He vows revenge against Ambrose’s missing wife Rachel (Rachel Weisz), blaming her for his untimely demise. When Philip meets Rachel for the first time, his mood suddenly changes as he finds himself falling for her seductive charm and beauty. As his obsession for her grows, Rachel now hatches a scheme to win back her late husband’s estate from the unsuspecting Philip.

Whilst “My Cousin Rachel” could be seen as a thriller as well as a ensemble piece the real thrust of the story, as well as the reason for any thriller aspects is driven by the excellent performance by Sam Claflin as both Philip and his Uncle Ambrose. I found the character of Philip to be completely fascinating, the word I would use to describe him is juvenile. Once you watch the film you may think he plays the innocent but in fact he has been raised to be ignorant of almost everything to do with relationships as well as perceived outsiders to his family unit of two. In fact he is given the opportunity to expand his horizons, mix with new people of a different social strata as well as receive an education but he spurns this as he sees this as unimportant, something he will of course later regret, as he is clueless about anything outside his extremely narrow field of vision.

The very reason that Rachel is a mystery as well as the reason that she is able to spin her web, entrapping Philip seems so obvious to not only the audience but to all of his friends  – the only others that seem not to notice Rachel’s hypnotic spell are all the workers and servants that work for Philip – much like they are extensions of his will, they, like him are manipulated by others with no power of their own. In fact the simple fact is that there is no challenge for Rachel, she in fact does very little up to the point Philip makes his sad intentions clear – she is as passive a person or antagonist as I have ever seen in a thriller. It is Philip with his seemingly simple way of viewing the world as well as the people who inhabit it, that he has trouble with. Philip is completely without the ability to rationalize his thoughts in terms of anything he does immediately, understanding and reacting with emotion whilst putting logic to one side, he is a pure emotional being, not confined to one he seems to be only able to cope with one at a time, anything outside of that does not compute.

In fact the film is so closely associated with Philip that every scene only concerns Philip, his relentless drive towards some truth about his own situation. In saying that of course it means that the lead actor has to be on his game – in that, Sam Claflin, who plays the protagonist is excellent here as the Philip – he has to carry this entire movie from beginning to its gripping, sad, conclusion – he has the opening narrative dialogue as well as the haunting final statement. Claflin has been making some extremely interesting choices in terms of movies this year, one only has to watch the excellent Dunkirk film “Their Finest” (2017) to see that. He strikes me as a more austere and serious Hugh Grant, which believe me is a compliment. Claflin could be making bigger budgeted movies or be the lead in charming indies, but sees to have chosen a slightly different route – not unlike his peer Dan Stevens.

The rest of the cast is rounded out with some great English talent, no more so than Oscar winner and titular character Rachel Weisz, who plays the role of Rachel with reserve as well as a hint of coldness – watching her you are not sure really what her motivations are at all, she enters the film about a quarter of the way in, all the while being built up to some kind of super woman that has a true dark side. Of course the reality of her arrival is not what Philip or the audience expect, like most things the expectant evil genius is not what she seems, or is she? The two other actors that witness what is going on are “Game of Thrones” stalwart Iain Glen, as Philips legal guardian, Nick Kendall, and Holliday Grainger as his daughter, Louise. As you would expect they are both excellent, underplaying the happenings in Philips life, trying to not get in the way until it really is far too late for the plot, which ends up snowballing to its eventual climax.

Roger Michell, the director as well as adapter of the original novel has created a real elegant looking film, that owes a debt to Kubrick’s “Barry Lydon” (1975), with its lush settings, real props, on the nose art direction, but most importantly its use of subtle source lighting that has to be seen to be believed. Michell who is South African born had had a varied career with his biggest hit being the Julia Roberts/Hugh Grant classic “Notting Hill” (1999), it is with “My Cousin Rachel” he has created his best most personal work to date – when I view this film it seems to me he is in complete control of performance as well as camera. The elegant nature of the daytime scenes, as well as scenery is as good as it gets – there is one scene in a barn full of hay with Phillip in conversation with Louise that looked like a painting from the period, shafts of light entering windows up high – just breathtaking.

In case you have not guessed I really enjoyed this film, it stayed with me many days after I had seen it, mainly because of the relieve complexity of the plot, it does remind me of elements of “Gone Girl” (2014) with a female protagonist as an unreliable narrator – even though in this film it is a male narrator who is letting us in on the story. What is interesting here is the way in which Rachel is able to manipulate almost everyone around her not only with ease but also with a real lack of action. It is almost like people see in her what they want to see – their own emotions are cast back at them – we see what we want to see until it is too late.

I thoroughly recommend this film to people who enjoy thrillers that are not only based around gender as well as the standings of people but that will not mind the steady pacing that could leave some modern audiences craving some movement as well as a complete ending.

“My Cousin Rachel” is out now on DVD & Blu-ray. 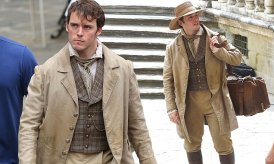 Actor Sam Claflin and Pierfrancesco Favino are seen on the set of the movie My Cousin Rachel on June 06, 2016 in Arezzo, Italy. Photo BEESCOOP.COM exclusive 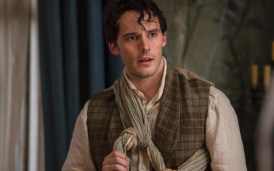 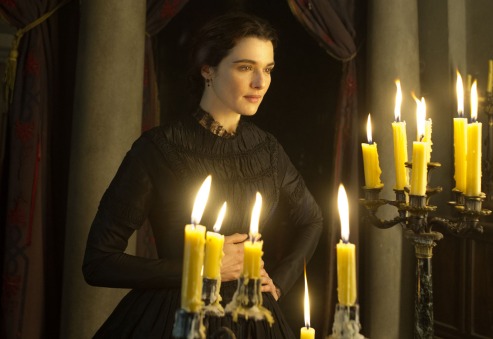 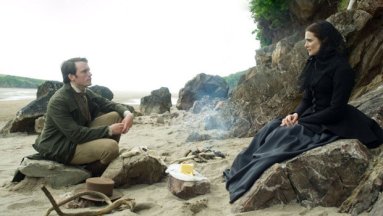 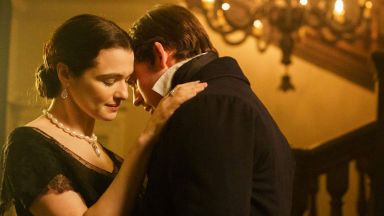