Claire Temple: “You’re on the same side.”

After two years in the making the show that Netflix promised they were building towards has arrived and is streaming right now, “The Defenders” (2017), the uniting (in some cases reuniting) of four of the separate heroes that have come before in their own shows – Daredevil, Jessica Jones, Luke Cage and Iron Fist. The question for me is does this team-up television series live up to the best of the singular series as well as leaving behind and improving on the weakest one, as well as the weaker aspects of the rest? The simple answer is that it pretty much delivers on the promise of what we were told a few years ago, while not being perfect it does hold the attention for the eight episodes that have been produced which is all we could ask for, especially after the disappointment that was “Iron Fist” (2017) earlier this year. Indeed it felt that this smaller Hells Kitchen Universe may be sagging under its own weigh of expectations, particularly because one of the better characters, The Punisher, was going to be absent from this super team series.

The definite high points of these shows has been both “Daredevil” seasons as well as the surprise that ended up being the first series of “Jessica Jones” with its Machiavelli like villain, ‘The Purple Man’ played by possibly the best bad guy in any Marvel film or television show, David Tennant. None of the other shows has really come close to these except for the first half of “Luke Cage” with his initial villain ‘Cottonmouth’, played by newly minted Oscar winner, Mahershala Ali. So it is unfortunate that we have now been stuck with ‘The Hand’ an evil empire like organization that was so effective and menacing in the comics has been turned into some kind of ineffectual crime syndicate with what turns out be pretty mundane objectives. With only half of the main villains really feeling like a threat to our heroes – something this show has in common with many of the other Marvel properties – truly menacing villains are so hard to get right. It appears the showrunners are unable to decide whether ‘The Hand’ are spiritual, mystic or just a crime family that have an unlimited amount of foot soldiers as well as a fractured leadership.

This is not a perfect show and in fact contains many tropes as well as weaknesses that are inherent in many comic book adaptations, but as I have said there is much to like, in particular the casting as well as how all of these disparate actors come together with many of their own supporting actors, actually works extremely well, something the show runner Marco Ramirez has to be commended for as he had no control over pre virus casting choices. The other aspect that I thought was great was the way in which the storyline was streamlined but kept (or tried to) things simple such as the Elektra/Matt story, The Hand as a criminal organization, what was happening with that big hole as well as some of the more relevant stories with the supporting characters in particular Claire (Rosario Dawson) – with all her contact with the main heroes. To be fair as far as I could tell The Hand storyline is resolved at the end of the series which if it is, means that all the other series have actually meant something, also I am totally ready to move on from this situation, and for new problems, issues and villains to emerge. To be fair it is the “Daredevil” series that has the most to offer with a variety of options including of course the return of Kingpin, the emergence of Gladiator and possibly the introduction of Daredevils most iconic foe, Bullseye.

Once again it is Jessica and Matt that steal the show followed closely by Luke, but the entire series feels dull when Danny is involved. In saying that Danny has improved greatly from his own series but there are still concerns about his actual character, I don’t really understand his motivations as well as his partners, Colleen, who actually was even more annoying than ever. I can only hope that when his second season starts (with a new show runner, the previous one was fired) his story, motivation as well as his existence is more clearly defined as well as his look, his powers and the odd way he always loses his temper. The use of Sigourney Weaver as the head of ‘The Hand’ lent the show some real class and menace, which was needed as the rest of the fingers of ‘The Hand’ seemed anemic at best. The reintroduction of Elektra was fun, but how it was managed was a bit clumsy, as when it happened in the comics the process lent more mysticism to ‘The Hand’, which was missing here and was missed overall. In my mind ‘The Hand’ were much more malevolent, menacing and could be counted on to feel like a true threat to anyone they went up against so they ended up disappointing me by quite a large margin.

As I have sais this is not perfect and one of my main issues, and this may sound pedantic, were the sets as well as the general mise en scène which looked not only average but under budgeted, especially the final episode which was about as underwhelming as it gets – really a cave with some obvious styrofoam rocks and walls – just shocking. Another issue was the seemingly endless supply of henchmen that appeared out of nowhere whenever the heroes needed some sort of obstacle, which got tiring as well as the uninspired fight choreography which looked like the kind of thing you might have expected in “Iron Fist” not “Daredevil”. Something else that was more annoying than anything else was the timelines as well as actual threat of ‘The Hand’ as in one instant they seem everywhere and unstoppable but then they are easily taken down by blowing up a building – Huh? Once again the villains in Marvel are not thought out or there is no follow through in maintaining the meanings behind the bad guys, they just seem thrown together.

With all that being said this was still at least the third most enjoyable series out of the six so far, the positives far out weigh the negatives, which is always good. The length, eight episodes, made the time fly by and it seemed a better way to structure the series as it did cut out any real extraneous material, something “Luke Cage” and to a greater extent “Iron Fist” could have done with. I found it really enjoy able and watchable because over a short period of time there are many storylines wond up with a steady eye on the future with some of our heroes accepting that they may have destiny as well as them knowing they can call on each other in the future so I would say that in the not so distant future there will be a “Defenders MKII”.

“The Defenders” is streaming now only on Netflix. 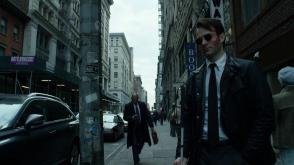