‘The Tick’s’ origins go back to 1986 when artist Ben Edlund created him as a mascot for a comic company, which eventually turned into a comic, that became an animated series which in turn became the short lived and loved television series, “The Tick” (2001) featuring the perfect casting of Patrick Warburton in the eponymous titled superhero role. Now Amazon Studios have resurrected the character in an initial six episode run that acts as a kind of origin story although not for the main character but wisely for The Ticks sidekick chum, Arthur who is played as a nebbish accountant conflicted by his need to exact revenge on the main super villain, ‘The Terror’ for the death of not only his father but also his superhero idols.

After a major glut of comic book movies and television shows over the past few years it is refreshing to see something from the 1980s being brought up to date, as well as making a relevant comment on its own genre, while feeling not only refreshing but actually funny as well, exploring themes that exist outside of its genre, there are themes of family expectations, corporate politics as well as actual politics, what it means to either have a secret identity or existing just as a super hero (or villain), and what it means to exist as a hero or villain living on a day to day basis – what matters most in life, you, your friends or family or society as a whole?

The Tick is a nigh-invulnerable superhero in a blue tick costume that arrives in The City to help combat crime, and uncover the mysterious figure behind the city’s underworld. He befriends (or may have been imagined into existence by) a nervous and mild-mannered young man called Arthur who becomes his sidekick: They come to realize that an apparently long-dead supervillian called “The Terror” may still be pulling the strings in the city’s underworld.

When a show is called “The Tick” you had better get that casting correct, in this case that has been done so effectively that it was easy to see the Patrick Warburton version easily transforming into the Peter Serafinowicz version of the same hero. Serafinowicz who has been a staple of the English comedy scene for well over fifteen years as well as an accomplished voice actor (he was the voice of Darth Maul in “Star Wars: Episode 1 – The Phantom Menace” (1999)) shines here using all of his talents as well as natural physical ability as the oddball ‘The Tick’ as well as being a great foil to his sidekick Arthur, both his real as well as his superhero name. Griffin Newman playing Arthur the real main character of this show was born to play this role, he not only echoes the Arthur from the comics but also fits perfectly with the other Arthurs that have come before him. Not once does he play the character with any irony, in fact he plays him so straight with enough natural subtly that the show almost works without the Tick sticking his nose in at every turn – but I suspect that is the point not only of Arthur but the television show as well. The cast is rounded out with some other excellent actors but for me the next best is Yara Martinez as Ms. Lint who can fry you with electricity, Martinez has had a pretty successful career as a character actress in pretty much every television show you can imagine, so it is here where she has her chance to make a mark in more than one episode – here she shines.  Its enjoyable to see a new face that has been around for a while take a part and make it her own, especially a character that is quirky as well as morally lost (well at the beginning) as Ms. Lint is. Rounding out the cast is the wonderful Jackie Earle Haley who after his Oscar nomination all those years ago has proven to be a master of the morally bankrupt characters particularly adept under make up, he is the wild card in a cast that is pretty good to begin with. Look out for Alan Tudyk as the voice of a sentient boat called ‘Dangerboat’ who lives with another hero, ‘Overkill’ just classic you have to see their relationship to believe it.

The show is well directed by a slew of experienced television directors led by veteran Wally Pfister, whose claim to fame as well as moving into directing was as the longtime cinematographer of Christopher Nolan. Having experienced directors is a must for a short run show possibly made on a tight budget as it means they hit the ground running with their own style, the do not have to ease their way into some kind of new style – it is driven by the writer as well as the actors who have a strong say in their own creations. Speaking of the writer, Luan Thomas, has had very little experience in the scheme of things, he has done a wonderful job of creating an origin story over six episodes that leads nicely into the second lot of shows out in 2018.

What I really enjoyed about the show as the fact that the villain if the piece, ‘The Terror’ is the maguffin of the first series, where Arthur as well as Ms. Lint are both looking for him for extremely different reasons. They are both like lost children looking for different things, one is looking for a father figure (thats the best possible case), the other is looking for revenge on someone who killed his father – this is something that is kind off rectified in the last episode – even though you can see the ending coming it is still rather enjoyable. On one of the other aspects that is great is that the motivations of every character are laid out in the simplest terms, even the wayward main character The Tick just wants to beat the bad guys – he just needs an assist. This is something that many television shows do not do, they meander around for a few episodes trying to be cool as well as looking good but fail on the plot – this is where “The Tick” shines as it knows what its about.

I recommend this highly for most ages but if you loved any of the other iterations of “The Tick” or want a laugh with some action as well as pathos then this is for you – highly recommended.

“The Tick” is streaming now on Amazon. 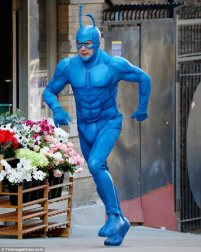