Rod Williams (Talking to Detectives): “Then he sent me some weird pictures… I’m like all man that’s Andre Hayworth… this dude been missing for 6 months.Right? So I do all my research you know cause as a TSA agent… you know, you guys are detectives, you know, I got the same training. We might know more than y’all sometimes, you know cause we are dealing with some terrorist sh_t, so… but that’s a totally different story. So look I, I go do my… my detective work, right? And I start putting pieces together. And see this is what I came up with. Their probably abducting black people, brain washing them and making them slaves. Or sex slaves. not just regular slaves, but sex slaves and sh_t. See? I don’t know if it’s the hypnosis that’s making em slaves or wot not, but all I know is they already got two brothas we know and there could be a whole bunch of brothas they got already. What’s the next move?”

Talk about great debut films, Jordan Peele has written, produced and directed one of the great films of 2017, which is saying something as we have had some very good releases this year already. What, for me, is fantastic is that this is a good old fashioned genre film that exudes many of the specific tropes that make this genre, horror, one of the best ways to not only view society but to physically see the choices people make in their lives to ether help or hinder others. Peele was half of the great US sketch comedy duo “Key & Peele” (2012 – 2015) along with Keegan Michael-Key who after their big screen movie, the excellent comedy “Keanu” (2016) (which Peele co-wrote) have gone their own way, each doing very different things. Keegan Michael-Key seems to have decided to appear in a variety of films in some roles that are a departure from what we are used to. On the other hand Jordan Peele basically seems to have poured himself into making “Get Out” which means he has been onscreen infrequently – but this has paid huge dividends as he has created something truly riveting as well as special. This is indeed a commentary on race in the post-Obama America, now that there is an open racist in the White House.

“Get Out” is based around African-American Chris Washington (Daniel Kaluuya), and his white girlfriend Rose Armitage (Allison Williams) who decide to take a weekend trip to meet Rose’s parents, neurosurgeon Dean (Bradley Whitford) and psychiatrist/hypnotherapist Missy (Catherine Keener), and her brother Jeremy (Caleb Landry Jones). Chris is disturbed by what he perceives as strange behavior from the black groundskeeper and housekeeper, Walter and Georgina, and that night, is invited by Missy to talk about his mother, who died in a hit and run when he was eleven. As they talk, Missy hypnotizes Chris into a paralytic state with the tap of her spoon to her tea cup, sending his consciousness into a void that Missy calls “the sunken place”. Chris wakes up in bed the next morning and initially believes that the encounter was just a nightmare, but later realizes that Missy has hypnotized him to quit smoking.

This film has made a star out of Jordan Peele as well as leading man Daniel Kaluuya, an English import who has been playing supporting roles in a variety of films. His last major role was in the well-received “Sicario” (2015) where he was Emily Blunt’s characters partner, who was the wise head amongst a bunch of emotionally charged characters. In his first real supporting role not only is he great but the material he has been given is nothing short of excellent.

Peele has written a screenplay that reflects a post-Obama America where the white privilege that existed prior to Obama being elected the first black President has given way to a new right that has started to infect the American dream. When we first encounter Chris Washington (great last name) with his girlfriend, they are the very example of a new America, a black man and white woman having a relationship that seems great on all levels, socially, sexually as well as politically. As we move through the film their relationship seems out of step as they move closer to Rose’s parents home. It’s a sad and sudden shock for Chris to see how Rose’s parents live as well as the kind of opulence they live in with what seems like a maid and gardener – both black and seem out of another America. As the film progresses things get suddenly weird for him as we have what seems like a slip back to how slaves were dealt with in earlier times – it is a sudden and eerie thing to be in the middle of what ostensibly is a horror film, then to be thrust into a story that becomes only about race, culture, political correctness as well as what it means to be non-white in Western Society.

As with all my reviews I am not going to give away any spoilers but this is a horror film with hints of comedy, drama and pastiche, with all these adding up to be more than the sum of their parts.

The cast is rounded out with actors of such high caliber that not only do they have the tools to incorporate many different emotions, but also they can seamlessly disappear into their roles so that there is only each other to play off. So we have Allison Williams as Rose Armitage who offers the right amount of pathos as well as creepiness, Bradley Whitford as Dean Armitage the patriarch who also acts like an odd Archie Bunker with a PhD., Caleb Landry Jones, as Jeremy Armitage brother and so who is off the rails from his introduction and finally  the amazing Catherine Keener as matriarch Missy Armitage who has the ability to ‘prep’ the guests.

As with many genre movies most of the antagonists are playing with duality, particularly in how they respond to the protagonist, Chris, who is unaware of any possible danger until it is too late. Much like the early days of the US where the economy was built on the backs of African Americans the way the Rose’s operate in their own ‘economy’ is similar. What Peele has done is to transplant all of the horrific practices from two hundred years ago and bring these into the present with truly horrific results.

In the Us African Americans make up a major audience for horror films, but seldom are they ‘seen’ in these movies, particularly as the protagonist – if anything the characters that they play are for onscreen deaths or hyper stylised reflections of the popular media – how many African American jocks can be seen in any genre – not only that they are amped to the nth degree. What Peele has done is give us a ‘realistic’ view of a real African American charater, it is one of the reasons why the movie is called “Get Out”.

This is a game changer of a film and has to be seen to be believed. “Get Out” works on many levels as all great films do. On one hand this is a competent debut from a writer/producer/director who has not shown this amount of talent prior to the release of his film. On the other hand this is a great horror film with a variety of comments on social norms as well as how segments of society trat and feel about other segments. I recommend this highly. 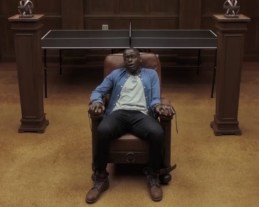