An unexplained mist slowly envelops the city of Bridgton, Maine, creating an almost impenetrable barrier to visibility. The residents of the town soon learn the situation is even more precarious as hidden within the mist are numerous monsters of various sizes that attack and kill anything that moves.

Episode Six: “The Devil You Know”

Episode Seven: “Over the River and Through the Woods”

All I could think while watching these four episodes of the television show “The Mist” was, does Stephen King like this series or is it something he does not care about or for. The reason for my thinking is that this is not a good episodic television show at all, which I think the channel as well as the producers know as you can almost see their thinking within these four parts – attempting to right a ship that is most of the way under the surface.

The narrative and plot have not changed from my initial review, although there is a part of one episode that has some hastily looking shot flashback scenes involving Eve and Jay as well as Jay’s brother that hints at some early strife between the couple caused by some comments from the community as well as an unruly past – it is a vain attempt to humanize both principal characters as the story they are involved in within the ‘present’ is going nowhere fast – you can’t blame the mist for that.

After watching seven episodes my main concern as well as critique of the show is that I am really unsure of what it wants to be. My second issue is the quality of the acting, which is not great, in some cases I feel like I am watching a melodramatic soap opera. Now, I realize that all television drama no matter the genre includes elements of melodrama, comedy as well as some kind of real actual human emotion. There are some television shows that are able to over time deliver some meaningful insights into the human condition, politics as well as something about the world we live in. This show finds itself self important as well as taking what was an absolutely great idea and premise but fails to deliver any kind of result that would give some reason as to why this show exists.

After seven of the most uneventful episodes we are no closer to discerning what the mist of the story is than when it started. This in itself does not have to be a make or break aspect of the television show, but with uninspiring characters as well as even more uninspired actors, exceptionally mismanaged tropes, the audience needs something to hang its hat onto – because at this stage we have nothing. I feel the need to compare this show to the movie of the same name, even less than a quarter into that film there was some kind of explanation about the phenomenon and where it possibly originated from – if only we even had a hint of where this mist came from it would keep me interested, but I am going to finish the season then see where it ends up – I am not expecting a second season at this stage.

It is unfair to compare the film “The Mist” (2007) to this version of the same short story, that film was written and directed by one of the supreme talents to ever translate not just one Stephen King work to the screen, but multiple ones, successfully as well as Oscar nominated. However when you do decide to take a work already translated to the screen you had better have a great idea as well as an even better execution of that idea – this show has neither.

It even began to play on my mind that perhaps “The Mist” film had not been as great as I remembered, so I went back after watching seven episodes of this, viewing the  black & white version just to test myself. I can tell you now that even with a relatively minor budget (US$18 million) some extremely ropey special effects it is not only one of the greatest horror films this century but one of the great King films ever produced. The main reason I love this film is because it is about fear, plain and simple. The fear of the unknown as well as the known, the fear of how we live as well as how we want to live, it was about the environment in which it was made, it can also be seen as the environment that we live in now.

Why mention all of this? Simply put, this series has nothing to say, at all, about anything. Actually scratch that, it does have things to say but most of them are hollow, vacuous, and meaningless as well as being a small part dangerous. Wait did you say dangerous? Yes I did and it’s all about the ‘Episode One’ revelation of the possible rape of Alex by Adrian that has not yet been resolved, I don’t think it ever will be. What this storyline, which is endemic of the show, is saying is that a girl is raped but the event is so small and overshadowed that it will not be a big deal if she is not only trapped with her rapist but she flirts with him, invites him to stay with her, then seems to want to be with him. That seems to be a male fantasy played out large on the small screen, one that should be killed in its tracks – just for the record there is one female writer on staff out of eight, and people wonder where these sexist storylines come from. There is also the storyline involving Eve about her ‘sordid’ past which is so hokey it hurts, either she is being slut shamed by her small town, or being conniving and gung ho about her situation, there is no realism to her or her family. These are just needless sexist archetypes that shouldn’t exist in modern horror or television; they are lazy as well as pathetic attempts to make audiences feel certain ways as well as offering titillation where none should exist.

While the look of the show should be commended the locations of the shoot as well as the sets themselves are fairly amateurish, they look like they were put together by school children working on a project for school. There is no feeling of world building or an authentic small town feeling to it. Almost all sets are one level, the mall is the worst, the people there are low on food but I don’t think I have ever seen a mall that did not have a supermarket attached to it, especially when almost everyone refers to the mall, it must be the major shopping center. I am not going to go into all the plot holes and inconsistencies, as this would be superfluous, its just safe to say that if you have not watched this series yet or were going to I would give it a miss.

“The Mist” is streaming now on Netflix. 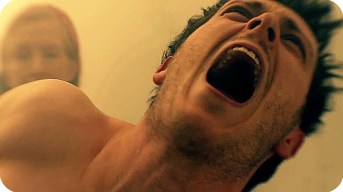 Frances Conroy stars as Nathalie Raven a modern day ecological martyr and prophet with a little knowledge and a lot of faith in Spike TVs THE MIST, based on a story by Stephen King, which premieres on Thursday, June 22 at 10 PM, ET/PT.

Eve Copeland (Alyssa Sutherland) r tries to protect her daughter Alex (Gus Birney) l safe from the dangers both inside and outside the mall when a mysterious mist arrives in their Maine town in Spike TV’s THE MIST, from a story by Stephen King. Episode 3 of THE MIST airs on Thursday, July 6 at 10 pm ET/PT.