Joe: “These banks practically destroyed this country. They crushed a lot of people’s dreams, and nothing ever happened to them. We three old guys, we hit a bank. We get away with it, we retire in dignity. Worst comes to the worst, we get caught, we get a bed, three meals a day, and better health care than we got now.”

It may be difficult for some to remember but director Zach Braff, star of the now defunct television show “Scrubs” (2001 – 2008), was once the bright light of independent cinema with his first film the always re-watchable “Garden State” (2004). Then came the extremely underwhelming “Wish I was Here” (2014) which showed he may not be up to the task of holding a story together – now comes his third feature “Going in Style” (2017), what seems like a copy of recent “old man” movies, like “Last Vegas” (2013), “Old Dogs” (2009), “Wild Hogs” (2007) and many many more. These simple films seem like the place where old A list actors go when original roles have dried up. What is unique about this film however is that the three principles Morgan Freeman, Michael Caine and Alan Arkin are still appearing in A list movies for A list directors, which indicates that this may have more to it than those previously mentioned movies. Spoiler warning: It does not.

This film is based around three characters Joe, Willie and Al who are senior citizens and lifelong friends. During an unpleasant appointment at the bank, Joe is one of the victims to witness a robbery in progress carried out by three individuals wearing black gas-like masks. When the company they worked for is bought out, their pensions become a casualty of the restructuring. Joe is hit particularly hard and finds out that he, his daughter and granddaughter will be homeless in less than 30 days. Willie finds out he’s gravely ill from kidney failure and needs a transplant. Willie’s frustrated because his financial situation forces him into a long-distance relationship with his daughter and granddaughter. Desperate, the three friends decide to rob the bank that holds their pension funds and take back what is rightfully theirs.

The film, on the surface, has some nice pedigree with the cast being great (the three main actors all being Oscar winners), as well as being written by Theodore Melfi who is hot of an Oscar nomination for his screenplay for the excellent and massive hit “Hidden Figures” (2016). Melfi was also nominated as a producer for the Oscar for Best Picture for the same film. From that recent success you may infer that this film will be a drama with a big dose of hunour, particularly seeing the cast and what they are capable of. There is no doubt Melfi knows how to write while giving a big dose of dramatic realism with that promised humor, I just wonder if at some point he was attached to direct, as I find he is an extremely good director of his own material. The writer in his short career has proved himself not only a very good director of the elements of his own writing, but also of actors both male, female, legends and ingénues. To me this is what is missing – his deft hand.

Braff on the other hand while an able comedy actor, which he has proved in his television show, is not able to come to terms with the material, as well the amazing cast. This film should have come off more like “Wild Hogs” which was a great comedy with an amazing cast, but also cut across the lines of what it is to be a little older as well as being a little uncool than everyone else – but illustrates through visuals what is unique about that. What this movie does is take three older guys, forcing them to be something they are not, while making them smarmy as well as a little unlikeable – that’s where subtly is – these three actors don’t need to prove themselves – they are legends. There is also an over abundance for almost every character to remind the audience that these guys are old – I’m not blind, I can see they are old.

The build up to the end of the film to the heist that takes place feels mostly tedious, although there are some laughs to be had. It also seems to me that there were a lot of scenes left on the cutting room floor, there are some abrupt cuts, as well as jumps in the story that make little sense – with some characters having a complete one hundred and eighty degree turn in their personality and motivation. The internal logic of the film makes little sense, as does the day to day running of retirement, banks as well as bank staff. The movie makes some serious comments about the economy but on a basis that makes little sense to anything reflected in the real world – such a missed opportunity – a better director may have been able to link these together.

The movie actually has some scary Trumpian logic to it – if that is a thing – and not an oxymoron. In the movie an American owned steel plant is closing shifting jobs overseas, not only that but the pensions that these people have worked for will cease, on top of that there is a ham fisted coincidence that the guys bank is going to carve these up. What I could see happening (and what hasn’t happened yet) is the new President saying, “See… this is what’s happening – this isn’t a fictional event it’s a documentary.” Be careful what message is being sent to audiences as this is what Fuhrer Trump warned us about. This is a sad indictment of the Melfi script, a good example of why he may have been better to direct.

Anyway letting go of the plot holes, as well the vague aimless politics, I would say that if you want a nice afternoon at the movies with some laughs, a heist film where its fun and games, then head along to this, you could do worse. It is definitely worth streaming but maybe not the deep dip for a purchase.

“Going in Style” is available on DVD & Blu-ray now. 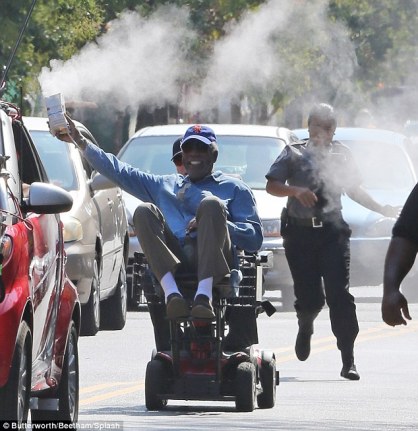