Jon Baker: I hope that you’re not praying on girls with low self-esteem.

Frank ‘Ponch’ Poncherello: “How are you judging them, like by their hair, like how straight their teeth are?”

Jon Baker: “She ate your ass?”

Jon Baker: “What about hygiene?”

Frank ‘Ponch’ Poncherello: “If you go to the bathroom and you see some baby wipes, green light.”

This film has been in the offing for a number of years, with a variety of different directors and actors attached. It has been in development for so long that frankly I am surprised it was made at all; I thought the brand recognition for this property would be all but dead. Warner’s have had other ideas and some success with modestly budgeted R-rated comedies, particularly with unproven talent in front of as well as behind the scenes. In this case they have given the reigns of this project to Dax Shepard, who at this stage may be more famous for his marriage to Kristen Bell, than anything he has accomplished in the film business. Judging from the results here as well as the relative success (or not as the case may be) of this film that may remain the case for Shepard, who has an ally in the form of always-reliable Michael Pena as his sparring partner in this 1970s re-tread.

The story (for what its worth) of “CHiPs” (2017) in this incarnation follows Jon Baker (Dax Shepard) and Frank “Ponch” Poncherello (Michael Peña) who have just joined the California Highway Patrol (CHP) in Los Angeles but for very different reasons. Baker is a beaten up pro motorbiker trying to put his life and marriage back together. Poncherello is a cocky undercover Federal agent investigating a multi-million dollar heist that may be an inside job, inside the CHP.

When they are teamed together they clash more than click, so kick starting a partnership is easier said than done. But with Baker’s bike skills combined with Ponch’s street savvy it might just work. Soon they find themselves in a situation like none other when a sadistic ex-cop, Vic Brown (Vincent D’Onofrio), and his motor vehicle theft hit men are wreaking havoc throughout their city.

The only other film that I think about comparing “CHiPs” to, is the excellent as well as hilarious re-make of the 1970s TV series “Starsky & Hutch” (2004). That film, not only had the benefit of something cool to draw on, that is the original television series, but the incredible talents of Ben Stiller, Owen Wilson, Will Ferrell, Vince Vaughn, and Jason Bateman, in front of the camera all doing the things they were so successful at then. But behind the camera you had Todd Phillips in the directors chair who was about to come into his own with the “Hangover” Trilogy, which would land him on the A list of comedic directors.

Unfortunately the only actor close to a star in “CHiPs” is Michael Pena who all respect to him, has not carried a film by himself yet, but he has such excellent comic timing that I pretty much forgive him for everything he does in this movie. Dax Shepard as comic actor is very good, he had a great turn in “Idiocracy” (2006) which is a must see; but he is a little uneven in this movie – he seemingly cannot decide how to gauge his own performance – my only real problem is that he should either stick behind the camera or stay in front of it – it takes very special talents for someone to stay in charge of a production as well as directing themselves. My thought was that there was no other male actor of a similar look and age that was available so this was rushed into production – and that may explain some of the issues with the movie. That is the miscasting, the unevenness of the plot, some very unfunny gags as well as having little actual style to bring to an audience.

“CHiPs”, ultimately, is just your standard action comedy romp with little attention paid to the script or really even the characters. Even though there are a lot of jokes they feel out of place in 2017; are gay jokes still funny or did “Benny Hill” and “The Two Ronnies” have a hand in this? Not everything is bad but when you have a modestly budgeted movie, the characters had better work, then the dialogue will flow – even comedies work that way – have a look at “Starsky & Hutch”, although the talent once again speaks for itself – in the end it is an unfair comparison. There appears on the surface anyway any proof that there was serious consideration to what is funny in an action film, as well as what is not.

I really wanted to like this movie but the writing is on the wall fairly early on, maybe it would have been better and funnier to have the two cops in an ‘out of time’ plot or something that made sense to the original series. I for one was pretty disappointed, finding myself asking how Shepard could write, direct, star and produce this without hitting the goal once. As I said earlier I think Dax should just act and leave the more behind the camera stuff to others, maybe to talented people that can wrangle both a script as well as look of a movie.

The one thing this film does do is to offer some counter programming to the glut of films being released over the next two weeks, for all its weaknesses it is a studio R-rated comedy for adults. The downside is that its not the greatest comedy, but you will have a laugh and if you do remember the original from the 1970s or have seen repeats you will recognize certain touchstones, such as the uniforms and the bikes – which is about it, as LA has changed so much that the geographic area fom the original is unrecognizable. 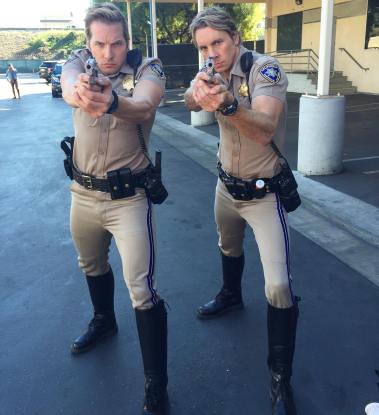