The series focuses on Shadow Moon, a man serving three years in prison. With only days remaining in his sentence, Shadow is given an unexpected early release after his beloved wife Laura is killed. Shadow finds himself next to a man named Wednesday, who offers Shadow a job. Wednesday appears to be nothing but a con artist who needs Shadow as a bodyguard. Season One concludes…

Where would “American Gods” be without one more “Coming to America” which serves as a bit of a bookend to the first episode as it features the beautiful and completely original femme fatale Bilquis. What we see now is how this old God used to feed in not only belief but also in the orgies that were acted upon in her name – a great and familiar scene on par with the lover eating from the first time we saw her many weeks ago. As with all the old Gods she fell out of memory, we witness how she attempted to stay in her followers minds – in the 1970s Middle East where ‘man’ corrupted her religion forcing her tp travel to America where she quickly forgets her own identity – we also see her possibly siding with New Gods in a  very foreboding way – although that will probably be followed up on in the second season.

As usual I am not going to spoil any surprises, but as usual as each week passes we are introduced to new characters in the way of Gods, with this week being no exception. We are also treated to another cameo in the form of the newly introduced embodiment of Easter, in the form of the always-delightful Kristin Chenoweth, as well as a multitude of Jesus’s, the prime one being played by the excellent Jeremy Davies.

Of course Mr. Wednesday is attempting to recruit ‘Easter’ in his upcoming fight, in this he reveals himself to be the Norse God Odin – not only that but Shadow seems to be finally getting the hang of the entire belief system as well as the pure power of it. Shadow makes his break through with the idea of Easter being personified in the form of a woman. He says, “people believe in Easter and so Easter is a person.”

This season has seen some great acting talent but the gift that keeps giving are really two fold, as well as becoming the MVP’s of season one – Emily Browning as the foul mouthed husband betraying crook, Laura, as well as the magnificent Pablo Schreiber as the foul mouthed unlucky crooked leprechaun Mad Sweeney. It’s funny and highly original that “American Gods” has been about relationships old and new. With Shadow and Laura who had a relationship built in love and trust, whilst the old Gods had the very same with their multitude of followers, but now most of them have either become a “Hope and Crosby” road movie, Shadow and Wednesday, or a mismatched Rom-Com, Sweeney and Laura.

However this episode like the previous season is all about belief, it is something that has stayed strong throughout these eight episodes, it ends on what belief can be as well as what it can do. So, the old Gods grit their teeth and using their power strike the first blow against the new Gods letting them know they are not done with yet – it is actually quite frightening, as with all planned out modern shows there is a cliffhanger – which I enjoyed but others in my household felt a little let down, with a hollow feeling to what as been a lethargic journey.

Once again the look of this episode like the rest of the series is original and incredible with the highlights being the shooting of Kristin Chenoweth as Easter. Chenoweth looks amazing as well as powerful, her make up is fantastic as well – we see at least three different versions of Easter throughout the episode – the final persona of power is the best as well as the most fiercely scary – maybe more than Odin himself. The director of this episode is Floria Sigismondi the first female behind the scenes, she is a breath of fresh air, formally a music video director, here she brings all her talent to bear on this season ending episode.

I loved the book this series is based on and I love this television show – I am a fan. I have one quibble, it is minor, but I wish this show was on Netflix or had been released all at once by Amazon. The reason I did not despair with the perceived slow release of information over eight weeks was because I generally knew where we were going, as well as who the players were,  I still know what is to come. I believe this show would have been better served by having all the episodes available to watch as one large chapter – it would have meant that the compressed time might have had the effect of speeding the plot up. It remains to be seen whether the comments about the show being slow will mean Amazon might have the courage next year to ramp up the release.

Amazon like an early Netflix are ramping up their production, green lighting new shows all over the place as well as having a few existing shows that are in their second, third and fourth seasons which is a good thing for getting new content but can also mean that if something is seen as not performing the axe could be swift. Some early good news was that “American Gods” will definitely get a second season, which will be at least halfway through Bryan Fullers planned three or four seasons, this will give the show enough episodes to at least find its legs.

Episode eight is now available on Amazon Streaming. Which also means that the entire first season can now be binge watched for greater enjoyment. Yay! 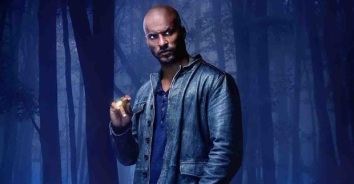