Dr. Fletcher: “An individual with multiple personalities can change their body chemistry with their thoughts.”

M. Night Shyamalan has been making films for some time now and achieved huge world-wide success with his second film, “The Sixth Sense” (1999) but since then has had mixed critical and box office success. His follow up to “The Sixth Sense” was one of the first post-modern superhero films, “Unbreakable” (2000), one of the most under-rated films of the past twenty years. There is nothing wrong with that but he set the bar so high early on that when he makes a miss-step people seem to pile on in droves. I have enjoyed most of his films, he seemed to have a fresh take on the horror genre with “The Visit” (2015), a collaboration with the Blumhouse production company, and so it comes as no surprise he should revisit the genre with “Split” (2017) – this time mixing new talent with some experienced actors.

“Split” was released earlier this year at theatres making a huge amount of money worldwide, a sequel is already being written, but not the direct sequel you might think, this will only be apparent once this film is watched – remember to stay right to the end.

The film finds three teenagers, Claire (Haley Lu Richardson), Marcia (Jessica Sula) and Casey (Anya Taylor-Joy), kidnapped by “Dennis”, one of the 23 split personalities inhabiting the body of Kevin Wendell Crumb (James McAvoy), a victim of childhood abuse with severe dissociative identity disorder, and held captive in a cellar. Kevin’s psychiatrist, Dr. Karen Fletcher (Betty Buckley), who believes that in such cases the psychological unbalance can cause physiological changes, is concerned to find an email from Kevin’s dominant personality, “Barry”, asking for a meeting. Over the years Kevin has been treated, he appears to be stable: all of his personalities sit in chairs in a room, waiting for their turn “in the light” (controlling the body), while “Barry” controls who gets to go in the light.

At the heart of this film lies the performance of James McAvoy, if this movie has a chance of succeeding it is going to be through his performance of the various personalities that are going to be on display. Of course McAvoy has been in plenty of genre movies before, he knows how to play to the camera with extreme characters, it just so happens that here he plays more than one in one film. McAvoy has great skill in choosing how to play each personality, here he is ably assisted by Shyamalan who at this stage has no problems in directing characters with strong personalities while balancing the performance with the storyline, where required.

Shyamalan, as I have mentioned is coming off an excellent last project so it makes a certain sense to see if he can not only revisit that well, but up the stakes in terms of both the storyline, actors and genre. He adjusts his directing style to the budget and the themes of this new movie. McAvoy is shot mostly in close up to intensify the changes in his behaviors and physical nature – which as the film movies on is revealef more and more. The full impact and nature of Kevin’s issues are not really revealed until the ending, and then the epilogue-like ending should be quite revealing for those that don’t know about it.

The other central characters is Anya Taylor-Joy’s Casey, who as the film reveals has her own demons to deal with, which are all too real, we see these in flashbacks which come as she sleeps – so she is trying to push them down into her sub-conscious which is not working. As it turns out she and Kevin are both victims but deal with their emotions in a completely different manor. I will always find it amusing that many mental health issues are vilified and used to drive horror films to the precipice of the supernatural and then blur the lines – which is what happens here. Anya Taylor-Joy whilst having appeared in two other horror films, “The Witch” (2016) and “Morgan” (2016), this year alone, plays a very different part, not the girl being used or the killing machine, this time she is a hybrid of sorts that kicks ass when required.

This is a genre film so it does follow certain tropes, which it actually needs to so that it can also subvert the very same genre, which it does.. at times. There is a sub-plot involving Kevin’s psychiatrist which seems to only act as an information dump about the condition, but in truth this could have been excised and tightened the pace up a bit – this is something that Shyamalan does do to seemingly fatten his films out, but it really is not needed.

The film feels claustrophobic at its very heart both with the location of the abduction as well as the fact that Kevin is trapped in his own mind surrounded by voices that will not let up and must be confusing to him, much like his real life captives who are in a disoriented world of their own.

One word of caution I would not read anything that would spoil this film,  whilst the word Shyamalan has been used as a verb to describe his endings this one does not have the twist you might be expecting from him, but there is still an ending that should satisfy the people that have long been fans of his films.

This is an excellent genre film and I can honestly recommend this very highly and its worth going to see at the theatres, with a group of people and it wont hurt to have seen a few Shyamalan movies previously, I would recommend “Unbreakable” (2000). 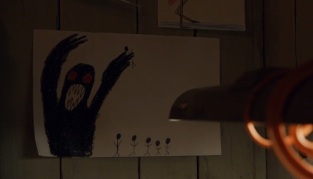