Spud: Well, what did you think I would do with them? I’M A FUCKING JUNKIE!

Renton: Yes… Yes, I suppose you was.

Spud: I still am.

Can you ever truly go home again? This is something that literally haunts this new Danny Boyle movie, “T2 Trainspotting” (2017), the sequel to the now twenty-year old “Trainspotting” (1997). The question that will be on everyone’s minds is – Is this film any good? Does it live up to the original? Both great questions, the answers are not easy to come by. To be honest I was not sure what the motivation was to making a sequel in the first place, as saying that the original film is a classic is an understatement. Not only did “Trainspotting” launch Boyles career it also launched Ewan McGregor, Ewen Bremner, Jonny Lee Miller and Kelly Macdonald careers, none of them have been out of the spotlight since, in fact all have extremely strong television and film careers. It also solidified Robert Carlyle as one of the strongest character actors in the world today, he has featured in almost every genre and even played a Bond Villain – surely the highest praise of any UK born actor in the world today. The director, Danny Boyle is the one who went on to helm many international movies, solidifying his reputation with his Oscar win for best director for “Slumdog Millionaire” (2008). Coincidentially that film launched the international careers of Dev Patel, Anil Kapoor, Ifffan Khan and Freida Pinto – it seems Boyle has the talent all great directors have – talent spotting. So after twenty years what does it all mean?

It has been 20 years since Mark “Rent boy” Renton stole from his friends half of the £16,000 they’d made in a drug deal and fled the country. He has apparently made a decent – but unfulfilling – life for himself in Amsterdam, and returns to Edinburgh to make contact with those in his former life. Daniel “Spud” Murphy continues to struggle with his heroin addiction, which has caused him to lose his construction job and estranged him from Gail Houston and their son Fergus. Simon “Sick Boy” Williamson, now a cocaine addict, runs the Port Sunshine pub he inherited from his aunt, and with his Bulgarian girlfriend Veronika attempts to blackmail men by luring them into sex videos. Francis “Franco” Begbie is serving a 25-year prison sentence and is denied parole due to his violent temper.

Mark stops by his childhood home, where his father tells him of his mother’s death while he was away. He visits Spud at his flat, narrowly preventing him from committing suicide. Spud initially resents the intervention, but Mark offers to help him out of his addiction. Mark visits Simon at the pub intending to apologize and pay back Simon’s share of the money he stole.

One of the most important aspects of the original movie was the soundtrack, and while I would like to say that the sequel’s soundtrack is as good it is not. However there are some bright points, the one thing that is great is the constant underscore of Underworld’s ‘Born Slippery’ which of course harkens back to the original but in my mind it is extremely indulgent as well as nostalgic – if this film should be about something it should not be nostalgia which is a crutch for the weak. Now, its not to say that the soundtrack is bad its just a bit dated as well as being some popular songs that everyone will know and not feel alienated – so audiences that were fifteen or twenty in 1997 now feel they are watching themselves age with music that wont be offensive. I mean Queen is on the soundtrack – WTF – this is something that wouldn’t have been caught dead in the original.

The movie is full of nostalgia, which when dealing with a film like this is not a good thing – when Renton turns back up to see his ‘mates’ there is enough blame from the previous film to go around. It is a handy coincidence that Sickboy is still a madman drug taking con man, Spud is trying to recover from smack and Begbie turns up as an escapee – trying to recapture his youth. This storyline is something that has been the subject of television shows for years – middle age wankers trying to recapture a youth that was never theirs in the first place. Like a greatest hits compilation from your favorite alternative band (now broken and broken up) this movie revisits all the memorable parts of the first film but this time with middle age spread and a healthy dose of guilt, loss and of course nostalgia.

The sequel would not have been possible without Danny Boyle and Ewen McGregor burying the hatchet after they had a falling out over the casting of “The Beach” (2000), where Boyle went with Leonardo DiCaprio.Instead of McGregor – it was one of DiCaprio’s first post “Titanic” (1997) role so he was hot.

The movie sees the return of all of the cast, even Kevin McKidd in flashback as well as seeing a memorial to him and the hugely in demand Kelly McDonald in a cameo as a lawyer so now we know she turned out alright. Then there is the scene stealing (just like the first film) Ewen Bremner as Spud, the still smack addicted mostly comic relief and cautionary tale who it turns out is an author in the making – of course he is, because like all of these characters they have learnt something and discovered their inner truth – please, how convenient. Then there are Robert Carlyle and Johnny Lee Miller who appear to have stayed true to their past, but of course even the evil Begbie who has a grown son as well as the estranged wife sees his life has moved on without him. Oh by the way even Begbie has a ‘moment’ with his son and wife where he acknowledges his son as a better person than him – really? Begbie – come on – its nice to know that exactly twenty years later he is a better man – yeah right. Johnny Lee Miller was always too cool and way to good looking for the original, but here he hasn’t aged a day and looks better than ever, even though he is supposed to be a coke head – welcome back to the 80s Sick Boy.

There is a convoluted plot involving a night club and some other bits that don’t really hold together and are not really that interesting, with a climax involving Spud being a master signature faker which has been conveniently retconned into his past which is neither here nor there. The film does come alive when it parodies the original and when the characters interact on a level that we will all recognize, but when the credits role you may be, like me, thinking that this was surely a missed opportunity for something bigger, better and be more authentic.

If you can get past the constant call backs, visually, sonically or even just inserts from the original film then this might be the film for you. For me it was just to nostalgia to the point that it became over the top, none of the characters have moved forward and to add insult to injury they were given some pat Hollywood ending, it was sad after twenty years to be served up this mess of a movie. The only thing I can think of is that the luckiest person in terms of this film is Kevin McKidd who got out of this sequel by dying in the first film. 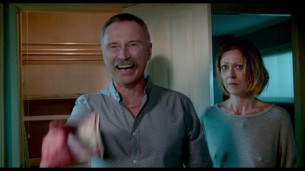 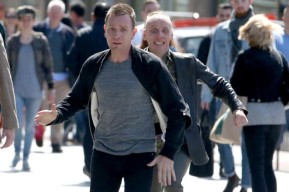