Baby Groot: I am Groot.

Rocket: He says, “Welcome to the frickin’ Guardians of the Galaxy!” Only he didn’t use “frickin'”.

Three years after the success of “Guardians of the Galaxy” (2014) hit cinemas comes its obvious follow-up “Guardians of the Galaxy Vol.2” (2017), written and directed by the latest geek king James Gunn (now that Joss Whedon has been pushed aside) – this is not only a sequel but part of the overall now infamous Marvel Cinematic Universe that began in 2008 with the Jon Favreau directed “Iron Man” (2008), at the time making a star out of Robert Downey Jnr., and pushing Favreau onto the A-List of Hollywood directors.

At the time the original movie was seen as a huge gamble for Marvel as literally nobody outside of comic fans had even heard of this team of misfits, let alone knew any of the individual characters – absolutely none of the previous Marvel films had mentioned any of the characters so this was an unknown quantity at all levels. That film ended up being one of their more original movies, and as a first in a possible mini-franchise it was super successful making US$770 million worldwide. Plus, it was a critical success with film critics and most importantly, fans alike. This was also the movie that made a superstar out of Chris Pratt who has been a great character in television’s “Parks and Recreation” (2009 – 2015), but it was “Guardians of the Galaxy” that showed him as a dramatic, comedic, and action orientated actor – not to forget the dancing. The question now is, can the sequel not only match the first films success but can it be its own movie while upping the stakes as well as feeding into the wider Marvel Universe and those pesky Infinity Gems.

The Guardians of the Galaxy – Peter “Star-Lord” Quill, Gamora, Drax the Destroyer, Rocket Raccoon, and Baby Groot – accept a job from the Sovereign, to defend valuable batteries from an interdimensional monster in exchange for Nebula, a wanted criminal and Gamora’s sister, whom the Sovereign captured. But despite Star Lord’s word, Rocket steals several of the batteries. When the Sovereign discover this, they accuse the Guardians of betrayal and attack the Guardians’ ship, with their own fleet of drones. The Milano is heavily damaged and forced to crash-land on a nearby planet, but the Sovereign fleet is single-handedly destroyed by Ego (Kurt Russell), who reveals himself as Quill’s father. Ego invites Quill to return to his home, accompanied by Gamora and Drax. Rocket and Groot remain to repair the Milano and guard Nebula.

The film actually has quite a dense plot for a Marvel film, much more layered than the previous film. The themes of patriarchy as well as familial relationships are explored in quite some detail, which leads to long breaks in the action. One of the best elements of the original film was its adherence to the action film trop, that is the plot as well as the narrative is always moving forward with any exposition being given within scenes of action. However, this slows the pace of the film down dramatically as well as adding to the long running time of the movie itself. I may be in the minority but I believe this might be a positive for the film as it deepens the characters as well as setting up a more streamlined,lined third film which can not only a positive for this franchise.

Like the recent sequel “The Fate of the Furious” (2017) one of the ways a franchise can top itself is to bring in a new raft of actors to play characters that are at some point familiar, but also add to the general mayhem of the plot. In this case the film has added one of the more iconic actors of the past five decades who once cast brings many of his previous roles as baggage (good baggage in this case), the always great (and I mean that) Kurt Russell, as Ego The Living Planet – yes you read that correct, Russell is playing the human embodiment of a sentient planet – also Peter Quill’s (Chris Pratt) father. In other casting we see Sylvester Stallone, Miley Cyrus and up and comer Elizabeth Debicki as the high priestess of the Sovereign as well as a possible instigator of the next movie.

The other element that “Guardians of the Galaxy” has in common with “The Fate of the Furious” is an element that appeals to audiences as its something most people can either relate to or would like to relate to, that is the idea of family whether that mean blood relations or something you might feel with the closest if friends – trust and clarity. Whilst some people see a similarity with the “Star Wars” (1977 – present) films, a kind of space opera, I see more of the Roger Corman produced “Battle Beyond the Stars” (1980). That movie became all about misfits thrown together to work towards some common goal and this is what the disparate characters are asked to do here. While the foundation for the “Guardians” family was laid out in the first film, it is expanded again with the addition of Yondu (the scene stealing Michael Rooker) as well as Nebula (Karen Gillan). These two who were antagonists in the first film become somewhat trusted allies to the main cast in this outing – they are both brilliant comedic actors who shine here in expanded roles.

Of course a film like this requires a strong leader at the helm, James Gunn as co-writer as well as director holds this movie together with sheer will and talent. Over the course of Gunn’s career which to this point has been “Slither” (2006), “Super” (2010) and then “Guardians of the Galaxy” (2014) which have not only been films about family but have also had rather large casts that required a delicate balancing act so that no one felt underserved. This is something that should not be under estimated as a talent for a director, particularly with one that is so relatively inexperienced, as there is much pressure on a movie like this when there is so much money at stake, as well as a film in a much larger environment. Gunn is growing as a talent in front of our eyes, Marvel Studios has trusted him to deliver a movie that is quite different from the first, that is a very good thing.

The action as well as the environments that have been created for this film are as you would expect incredible, we are seeing corners of the Marvel Universe that have so far been untouched, even including the first film. The mythology of the Marvel Universe is growing at an incredible rate, it will need to continue with the upcoming Avengers films in the next few years. If you are a comic fan or have read these particular titles you will get a huge kick out of what Gunn has accomplished. The biggest leap was to include Ego The Living Planet as even on paper from the 1970s it was a bit of a stretch but the casting of Kurt Russell is inspired and again something repeated from “The Fate of the Furious” as well as “Furious 7” (2015).

One word of warning there are indeed five stingers throughout the closing credits of this film which you should stay for as most are for comic relief but also hint to something wider. Another tip is to keep your eyes peeled for some guest appearances from other cosmic characters – I will not spoil their appearance but lets just say you should ‘watch’ out for them.

This movie is as good as the first in the franchise, not only that this fits in well woth the overarching MCU, with all the previous movies and those to follow. This is a spectacle of a movie with a plot that holds together within the generic narrative. We have come to expect humor from these movies and that is a major part of this movies success with Rocket (hilariously played by Bradley Cooper) as well as his sidekick Groot (Vin Diesel) once again making a play for the best charter in the MCU. Go and see now, and then see it again!

This movie is in New Zealand cinemas now. 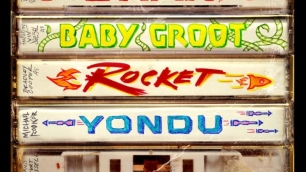