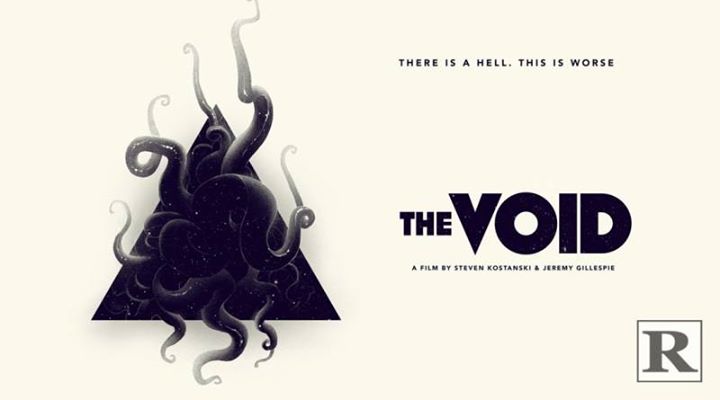 Original horror films are so hard to produce, they can be even harder to find for the public with a love of the genre. This year has already seen some great horror films, “Split” (2017), “Get Out” (2017) and “The Belko Experiment” (2017) to name just a few; of course there have been some pretty big stinkers as well, “The Bye-Bye Man” (2017), “The Cure for Wellness” (2017) and “Rings” (2017). This is actually a large list, what is more impressive is that are all theatrically releases, have made (on the whole) quite a bit of money, both in the US as well as internationally. Now comes “The Void” (2016) a film produced last year but starting to be released around the world now, and is set for a home release of some kind in New Zealand.

“The Void” is based around police officer Carter (Aaron Poole) who discovers a blood-soaked man limping down a deserted road; he rushes him to a local hospital with a barebones, night shift staff. As cloaked, cult-like figures surround the building, the patients and staff inside start to turn ravenously insane. Trying to protect the survivors, Carter leads them into the depths of the hospital where they discover a gateway to immense evil.

Written and Directed by Steven Kostanski & Jeremy Gillespie, “The Void” comes fully formed as one of the more original films (of any genre) to be released this year, not only does it herald the arrival of a new and promising pair of creators to the genre, it announces them out loud, I for one cannot wait to see what they do next. Both of these directors have had experience in making films before so this shows an excellent progression from learning about the genre and gaining experience through other projects to fully formed idea that has ended with a film that is at least very good, as well as most importantly, original.

The film has been cast with some very experienced actors from a wide range of ages as well as a nice mix of gender. What this means for a film like this is that while some of the actors may be familiar they are not too familiar in that they will not take away from the story with their celebrity, like some well known stars will do. It also means that with possible new faces an audience will be more likely to go with them in terms of the story, this is so important with a film like this as it requires a bit more disbelief than the normal comedy or drama.

The tone genre films set are as important as anything else within the production, the directors of “The Void” nail this completely, and whether this is a budgetary or artistic choice it need not matter. This film is dark both within the frame as well as within the story. This darkness adds to the ambient nature of the film, as well as the way in which the characters behave towards the impending doom of the film as well as each other.

There are some touches within the film that are influenced by John Carpenter and even the great David Lynch. The monster in the film, is itself reminiscent of the wonderful “The Thing” (1982), and the way in which it interacts with its victims as well as those around it. The cutaways to the expanse of space for no reason (it seems), remind me of a Lynchian way to highlight a greater menace that the people within the hospital have no idea of.

This is a micro budget film and so CGI effects are out of the question as these would be far too expensive for the filmmakers to carry. Instead they have wisely invested their funds in the cast and practical effects, relying on lighting to cover up any possible issues with the production. If the filmmakers had known that this film was going to get some attention they may have paid more attention to the script and motivations of their main characters, but I forgive this because I enjoyed the film so much.

I can recommend this film to all fans of horror as well anyone that ejoys low budget feature that reach for the stars – they may not get there but its fun watching them try.

“The Void” is coming soon to DVD & streaming services in New Zealand.