Marcus: “We’ve got a job. I’m talking millions, this time.”

Willie: “Why are you even out of the joint anyway? You know, they used to sterilize guys like you, to keep the world from becoming some negro Land of Oz.”

When the original “Bad Santa” (2003) was released it was at a time when both star Billy Bob Thornton and director Terry Zwigoff were both critical darlings of the film world. Thornton had made a string well received independent films, but it was Zwigoff who had just directed Scarlett Johansson to her first great performance as Rebecca in the now classic “Ghost World” (2001) who everyone was looking at. The film also featured Thora Birch and Steve Buscemi in very unique roles, Zwigoff was also nominated for an Oscar for his screenplay.

“Bad Santa” was an exercise in bad taste in the best possible way, not only did it feature Thornton in the lead role, but the supporting cast was A+ with Tony Cox, Bernie Mac, John Ritter and Lauren Graham, all adding to the great script by Glenn Ficarra and John Requa who have proved to be a solid writing duo over the intervening years. In 2003 “Bad Santa” was different enough to be extremely successful, it ended up making US$63 million dollars at the US box office as well as much more on DVD when that could happen – talk of a sequel started years ago but there had been no movement on it until last year. It can sometimes speak volumes when very little of the original film makers return for a sequel, in this case only Thornton and Tony Cox have retuned for “Bad Santa 2” (2017).

Set thirteen years after the first film, Willie Soke remains depressed as ever, upset his “happy ending” did not pan out, as he is again addicted to sex and alcohol. After he tries, and fails, to kill himself, he is visited by Thurman “The Kid” Merman, who has just turned 21 and works at a sandwich shop. Thurman delivers to Willie a package containing a good amount of cash, and Willie soon finds out it’s from Marcus, his former partner who has been released from jail after the events 13 years earlier. Marcus, expressing remorse for betraying Willie, tells Willie he has an opportunity in Chicago, a deal that can potentially net them millions, though he is unwilling to disclose the name of his contact. Willie reluctantly agrees, unsuccessfully trying to help Thurman lose his virginity before he leaves for Chicago.

This sequel directed by Mark Waters who had some independent cinema credibility in his early days, has, for the past decade been making romantic comedies as well as some teen angst film fair, with his last film credit being the cinematic bomb “Vampire Academy” (2014) which was a disaster on most levels and wasted the acting talent of all involved. Waters is here directing from a script by relative newcomers Johnny Rosenthal and Shauna Cross who judging from their work on this film have either never seen the first film or have no idea why the first film worked so well.

Billy Bob Thornton once again playing Santa slob Willie Soke hasn’t moved on much from the first film, and remains a character with little growth, the same goes for Tony Cox playing Marcus Skidmore. It is a real shame because black comedies can sometimes transcend their own reason for being, becoming  a comment on social upheaval, at their best they can shine a light against the morale’s of the day, much like the first film achieved. Sadly, “Bad Santa 2” is just a crass excuse for a film with little reason for it being other than the first one was funny and a hit, it really offers nothing new. Unlike its predecessor where thumbing your nose to the PG rated rom coms of the time was seen as anti establishment, this new film is very much an establishment film – just look at Trump sometime, it doesn’t get any more establishment than that.

If you like foul mouthed, gross out comedies then this is for you, the story is seemingly superfluous as can be seen by how often the plot is forgotten, while Thornton takes center stage in every scene he is in – to me the only reason that this was made was that he agreed to be in it. I would say that the cast involved is too good for this film, except Christina Hendricks who seems to say yes to all sorts of R Rated comedies that are all well below her talent level. So, watch if you like but there are far better comedies out there – “Bad Santa” for example. 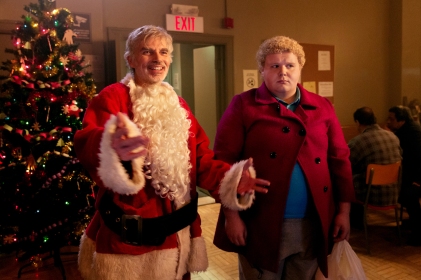 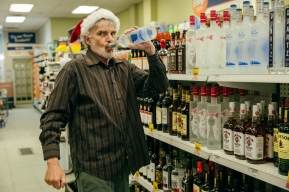 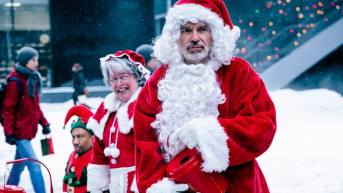