John Wick: “So I guess you have a choice. Do you want a war or do you want to just give me a gun?”

The Bowery King: “Somebody please get this man a gun!”

The first “John Wick” (2014) was a surprise but modest hit at the box office and had just enough of following so that this ramped up sequel was produced and so far had been the critical and box office hit that will probably lead to a Chapter three, or at least we can hop. The first film also saw the return of Keanu Reeves to a high profile action film the seemed to be what audiences were waiting for, and he was excellent as the single minded hit man seeking revenge for the death of his puppy, a gift from his now deceased wife.

“John Wick 2: Chapter 2” takes place shortly (about four days) after the events of the first film when Wick (Keanu Reeves) tracks down his stolen 1969 Boss 429 Mustang at a chop shop owned by Abram Tarasov (Peter Stormare), brother of Viggo and uncle of Iosef, the main antagonists from the first movie. John dispatches Tarasov’s men in a violent fight that heavily damages his car. He then spares Tarasov under the auspices of “peace” and returns home.

It is revealed that, years ago, to complete his “impossible task” – allowing him to retire and marry Helen – John asked D’Antonio for help. As a form of contract, D’Antonio swore John to a “Marker”, an unbreakable promise symbolized by a “blood oath” medallion. D’Antonio presents the medallion to demand services from John, but John refuses, claiming that he is “retired”. In retaliation, D’Antonio destroys John’s house with a grenade launcher.

Winston (Ian McShane), the owner of the Continental hotel in New York City, reminds John that if he rejects the Marker, he will be violating one of the two unbreakable rules of the underworld: no killing on Continental ground, and Markers must be honored. John accepts his duty and meets with D’Antonio, who tasks him with assassinating his sister Gianna D’Antonio).

To say that this film ups the ante in terms of action, violence, story and world building is an understatement, it is refreshing to find a sequel that not only increases the action and violence but also offers more of a peek into this hyper stylized universe of assassin’s that seem to populate this world.

Screenwriter Derek Kolstad and director Chad Stahelski return from the first film to really get their teeth into the story along with star Keanu Reeves who seems really invested in the character of John Wick, as well as the way in which he embraces a philosophy that defines the world he inhabits. I believe it only assists the new film that there is a continuation of talent that moves from film to film to keep the idea of a what a John Wick film is and can be as well as how the films keep getting produced.

The action in this new chapter has been upped as has the body count, there has also been more humor and over the top scenarios introduced just to make sure we all know that this movie is not only fictional but at times absurd in the way it treats what Wick is able to do and get away with. Both this film and the previous one have to be the greatest pure action films of the past ten years at least. They both do what primal action films at their best do, they keep moving forward and never let up, even if you think they are.

The star here is of course Keanu Reeves, who has proven time and time again he is a force to be reckoned with, particularly where you may have a tendency to underrate him. His best performances have been in films where you may think he is not the right choice; even those films that may have been unsuccessful have more than likely aged very well. Reeves has a knack for choosing not just good but great projects to be a part of. The ‘Wick’ films are no different and with the possible announcement of a third it may mean that Reeves will have his own franchise that is not overblown with ego and special effects. One of the great things about these films is the use of CGI, there is very little which is refreshing for action films in this new millennium.

The supporting cast sees holdovers from the first film making very welcome reappearances, Ian McShane playing Winston the father figure/mentor to Wick who offers advice as well as offering exposition to the audience, Lance Reddick as Charon the hotel manager and all round cool guy, he adds dog minder to this film and the always smart ass John Leguizamo as the mechanic and finder Aurelio. The addition of Common as fellow assassin and protagonist Cassian, Ruby Rose as mute bodyguard Ares and Riccardo Scamarcio as master manipulator Santino D’Antonio all add real value in the new characters they are portraying.

If you enoyed the first film then this is a step up in the way this world operates, it offers more of a glimpse behind the curtain that John Wick operate in as well as broadening the existing characters and seamlessly introducing new ones. Of course the standout is Reeves but kudos need to be paid to the producers, writer and director for all the new characters and the casting of those characters. It feels to me like there are no miss-steps or issues at all. This is the action film we have been promised for years, go and see as soon as possible.

“John Wick: Chapter 2” is out this week in cinemas only. 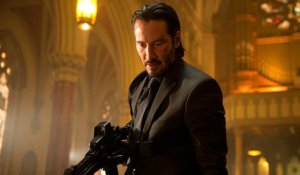 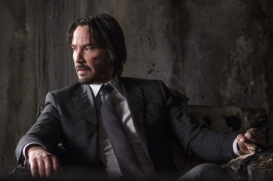