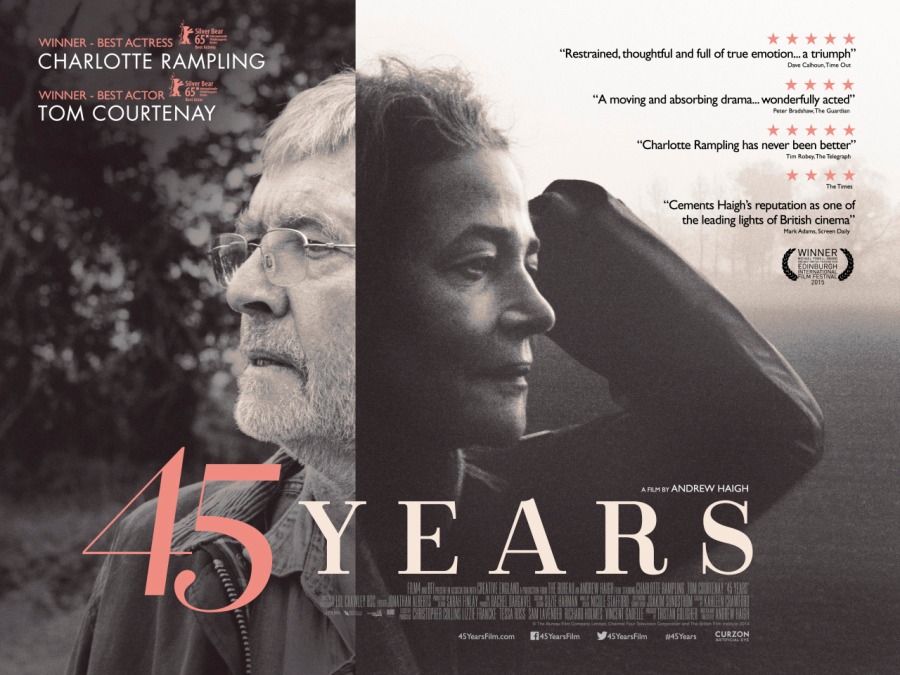 Kate Mercer: “Its funny how you forget the things in life that make you happy.”

This is the kind of adult drama that is becoming a rare commodity in the film world; it shares nothing but DNA with the modern day movie, but is a cut above at least 90% of movies released in cinemas each year.

Academy Award nominee Charlotte Rampling and fellow lead Tom Courtenay feature in this film in which a couple are about to celebrate their forty-fifth wedding anniversary when a blast from the past unearths feelings and emotions that had been forgotten about. Its obvious to say that only a certain number of actors could play these parts but an even fewer number could make them believable as well as giving them great depth in this very contained film.

The premise of the story is simple, in the week leading up to the event Geoff receives a letter from the Swiss government advising him the perfectly preserved body of his girlfriend has been uncovered in a glacier fifty years after she disappeared.

Needless to say this is a shock and brings up unspoken feelings between Kate and Geoff, and we see Geoff losing his grip by smoking (something he had earlier given up) and looking for pictures of his lost love – Kate too starts to unravel as she realizes their marriage might not be the perfect relationship she thought it was.

The performances by Rampling and Courtenay give reality to this script that could have been over acted and ruined, instead we see a lifetime of memories and actions starting to be questioned and of course with any great story the answers are not easily found.

Interestingly the metaphor of the couple’s home acting as a keeper of secrets as well as the couple themselves is no more evident than where memories are kept, in the attic, or, in the mind buried in boxes long forgotten but reawakened by a third party, and once these memories are out of the box, like anything it is difficult to put them back.

This is a film that lives and dies with performance but it is to Director Andrew Haigh’s credit that he has adapted and directed a film that looks so good and competent in only his third film out and to challenge himself with working with two legendary British thespians of such standing proves he can do wonders when working with the best.