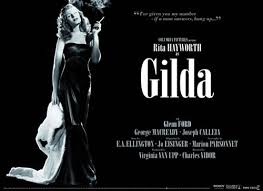 “I’ve got some news for you, Johnny. I’m going to do exactly what I please, when I please. I was true to one man once, hmmm, and look what happened.”

King Vidor’s film noir “Gilda” stands as one of the finest examples of that genre and possibly Rita Hayworth’s finest role, and a great turn from Glenn Ford.

Glenn Ford plays Johnny a down on his luck gambler living in Argentina, making his own luck by cheating his way into any game he can. He is befriended by Ballin, a nightclub owner looking for someone to pass his empire on to, with his own secret past. Ballin sees in Jonny an opportunist with a personality he can relate to. Everything is going fine until Ballin marries Gilda, a femme fatale of the highest order, who it turns out has a history with Johnny. As the twisted triangle unfolds and Gilda, who looks after number one, becomes increasingly bitter the story comes to a climax, throw in a plot twist some Nazis and you have a twisted fairytale for the ages.

This is definitley a performance piece, with the majority of the story-taking place in either a nightclub or Ballin’s lavish home. What we are left with is snappy dialogue, great deep sets as well as deep focus and actors, all at the top of their game.

Interestingly Hayworth’s name is above the title, Ford’s is below and with a female producer and screenwriter you have a film that is not often seen today – a feminist treatise on the noir genre – better than 95% of the other films that were made in this vein, and mostly generated by men. If you have not seen this film, or not seen it for a long time it is a true testament to the power of hidden meanings, false narrators and all the great stuff Hollywood produced at the time, particularly post World War II.

This edition of the DVD comes with a short piece from Martin Scorsese and Baz Luhrman giving their appreciation of the film from two unique angles and is worth watching if you want a deeper dive into “Gilda.”

Out on DVD now.